Sona Mohapatra took to Facebook and has slammed Sony TV and the makers of Indian Idol 11 for using a kissing video featuring Neha Kakkar for their commercial gain. Read on! 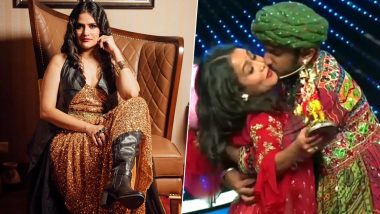 Singer Sona Mohapatra is known to be one of the unfiltered personalities in showbiz. She's that girl who does not keep mum and shares her opinion with fans time and again. After slamming Sony TV for choosing a #MeToo accused judge, Anu Malik for Indian Idol's latest season, the B-town singer has once again targeted the singing reality show. This time, Sona took to her facebook and shared a lengthy post bashing the channel for using a 'kissing video' for their 'commercial gain'. Well, if you do not remember, let us tell you, that Mohapatra's post is in reference to the viral video of a contestant forcefully kissing judge Neha Kakkar without her consent. Sona Mohapatra Hopes To Sleep Well After Anu Malik Steps Down As Indian Idol Judge.

The popular singer's post started by bashing Anu Malik and later on in her write up she emphasised how it was a marketing strategy by Indian Idol makers to use a kissing video as a publicity stunt to garner attention. "Using the theme of ‘sexual harassment’ for promotion & commercial gain is an all-time low & in a country where women have very little agency & choice, it is especially disgusting," a part of Sona's FB post read. While, we do not know if Sona's claims are right or wrong, but her post does raise many questions. #MeToo: Sona Mohapatra Thanks Her Fans As Anu Malik Steps Down From Indian Idol 11.

Well, this is not the first time Sona has slammed Indian Idol makers as time and again she has targeted them. From accusing Anu Malik of sexual misconduct to supporting singer Shweta Pandit when she called out Malik for misbehaving with her when she was 15, Mohapatra has proven that she is a  feminist. Stay tuned for more updates on the same!

(The above story first appeared on LatestLY on Nov 28, 2019 08:49 PM IST. For more news and updates on politics, world, sports, entertainment and lifestyle, log on to our website latestly.com).