Kaun Banega Crorepati is a game show inspired from British TV programme titled Who Wants to Be a Millionaire? Well, for fans KBC is not just a quiz show, but its an emotion. Check out how to register for KBC 2022 here. 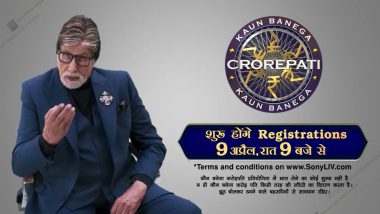 Amitabh Bachchan hosted popular quiz show, Kaun Banega Crorepati is all set to return with its fourteenth season. Airing on Sony TV, KBC is one of the most loved shows on India television. The most engaging part of this Big B show is that it adds on to one's general knowledge and also serves entertainment to the 't'. Well, it was on April 2, when the makers of KBC 14 had announced the registration date of the show via a fun promo. Kaun Banega Crorepati 14: Amitabh Bachchan’s Popular Quiz Show Returns, Registrations Open From April 9 (Watch Promo Video).

Talking about the promo, we get to see a young couple dreaming big. However, years pass by and the same couple get old and are unable to fulfill their wishes. Amidst this, a voiceover of Amitabh Bachchan says, “Sapne dekh ke khush mat hojaiye. Unhe poora karne ke liye phone uthaiye. 9 April, raat 9 baje se shuru horahe hain mere sawaal aur aapke KBC registrations. Sirf Sony par."  To note, just like last year, this year too the registration has gone digital.

Here's How to Register for KBC 14

The registration of Kaun Banega Crorepati 14 will start from April 9 at 9 PM IST, only on Sony TV. In order to register, one needs to answer the question correctly asked by Big B. In case, you do not have a TV, the question will also go live on SonyLIV app on the same date and time. Like every year,  the process to reach the hot seat, includes - registration, screening, online audition, and  interview. Kaun Banega Crorepati 14: Registration for Amitabh Bachchan’s Quiz Show Begins from April 9 (Watch Promo).

Kaun Banega Crorepati has been on air since 2000. Amitabh Bachchan has hosted all the seasons of the show except the third, which was hosted by Shah Rukh Khan. Apart from the commoners, KBC also sees celebs, cricketers, philanthropists and many more playing for their desired charity. Stay tuned!

(The above story first appeared on LatestLY on Apr 07, 2022 03:02 PM IST. For more news and updates on politics, world, sports, entertainment and lifestyle, log on to our website latestly.com).