Television celebrity Kishwer Merchant shared it with the world that she is expecting her first child with hubby Suyyash Rai. Yus, you read that right, the former Bigg Boss couple took to social media and updated fans with the good news. Check it out. 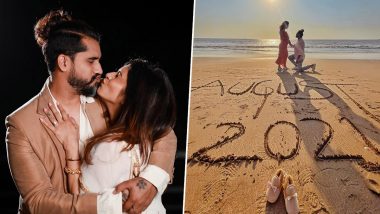 It's raining pregnancy news in the showbiz! As one after the other, we see many couples going the parenthood route. It was just yesterday (March 1) when Hollywood star Gal Gadot announced that she is preggers for the third time and now it's Television celebrity Kishwer Merchant who shared it with the world that she is expecting her first child with hubby Suyyash Rai. Yus, you read that right, the former Bigg Boss couple took to social media and updated fans with the good news. Gal Gadot Pregnant With Third Child, Flaunts Her Baby Bump in a Family Picture on Instagram!

In the picture shared by the actress, Suyyash can be seen going down on his knees on a beach, whereas Kishwer is seen in a comfy dress flaunting her baby bump. There's also 'August 2021' (baby's arriving month) made on the sand. "You can now stop asking "when are you guys gonna have a baby," the mommy-to-be captioned the post. The ditto pic was shared by Rai on his gram where we wrote, "Mai tere bacche ka baap banne wala hun." Anita Hassanandani And Rohit Reddy Welcome A Baby Boy! Hina Khan, Nakuul Mehta, Bharti Singh Congratulate The Newly Blessed Parents.

As soon as the two posted this news online, fraternity friends, as well as fans, started pouring in love for the pair. For the one's who do not know, Kishwer and Suyyash was part of a serial namely Pyaar Ki Ek Kahani in 2010 and started seeing each other while shooting for the same. The two got hitched in 2016. Congratulations to the couple!

(The above story first appeared on LatestLY on Mar 02, 2021 09:16 PM IST. For more news and updates on politics, world, sports, entertainment and lifestyle, log on to our website latestly.com).