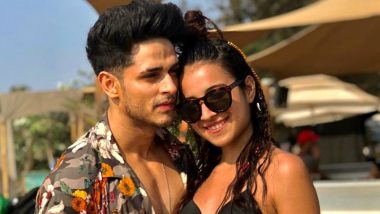 Celebrities love to keep their lives under the curtain with an aim to stay away from the drama. One such couple from the Telly world who has been playing peek-a-boo with fans from quite some time is none other than, Bigg Boss 11 contestants, Priyank Sharma and Benafsha Soonawalla. A few reports online have been hinting that the two are seeing each other from a long time, but have not gone out in public and declared their pyaar. Well, now looks like the quarantine time has made them realise something as the pair have finally made their relationship social media official. Priyank Sharma on Dating Benafsha Soonawala: Whether I am Dating Benafsha or Any Other Girl, It Is None Of Anyone’s Business!

Priyank and Benafsha took to their Instagram accounts and shared a cosy picture featuring the two in a romantic moment. But it's Sharma's caption along with the photo which has raised eyebrows. As the boy has captioned the image as 'confirmation'. In the photo, we see Priyank kissing Benafsha on her cheeks and it's indeed a beautiful pic. On the other hand, Benafsha captioned the pic as, “Can’t nobody keep me like you. Call it unconventional. My love is habitual.” This Old Video of Bigg Boss 11 Contestant Benafsha Soonawalla Kissing a Girl is Going Viral.

Check Out The Photo Shared By Priyank Sharma Below:

Right from the time, Priyank shared this picture, his comment section is flooded with congratulatory messages. Meanwhile, if a few earlier reports are to be believed than Priyank-Benfsha had called it quits last year in May, but after seeing the above pic, seems like all is well between the duo. Stay tuned to LatestLY for all the updates from Telly world!

(The above story first appeared on LatestLY on Apr 05, 2020 11:37 AM IST. For more news and updates on politics, world, sports, entertainment and lifestyle, log on to our website latestly.com).