Loki Episode 4 Song If You Love Me: From the Artist to the Lyrics, Know More About the Track That Played During the End-Credits of Tom Hiddleston’s Marvel Series

The song choices for Loki have been spectacular, the most notable being Dark Moon played during the credits sequence of episode three. Loki continues the tradition of ending episode four with another great song. Read on. 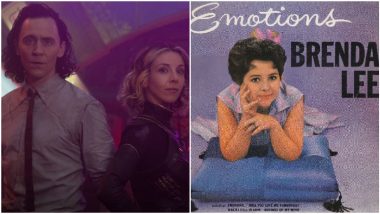 Loki Episode 4 Song if You Love Me (Photo Credit: Twitter)

Loki so far has had a spectacular soundtrack, which makes sense considering how Marvel has had great song choices attached to their properties. From its amazing original score composed by Natalie Holt "Holding out for a hero" being played during the opening of the second episode, the song choices for Loki have been spectacular, the most notable being "Dark Moon" played during the credits sequence of episode three. Loki continues the tradition of ending another spectacular episode with another great song. Loki Episode 4 Mid-Credit Scene Explained: What Happens in This Secret Scene in Tom Hiddleston’s Marvel Series? (LatestLY Exclusive).

This time the song was If You Love Me by Brenda Lee, a great classic song that really fit well with the tone of the episode. You can check out the song below over here.

The song belongs to Lee's 1961 album Emotions. In case you want to learn the lyrics, here it is:

If the sun should tumble from the sky,

If the sea should suddenly run dry,

Let it happen. I won't care.

If it seems that everything is lost

I will smile and never count the cost.

Shall I catch a shooting star?

Shall I bring it where you are?

If you want me to I will.

You can set me any task.

I'll do anything you ask.

If you'll only say you love me still.

When at last our life on earth is through

Let it happen. I won't care.

If you love me really love me,

The song itself is an interesting choice because of how much of it actually touches on Loki falling for Sylvie. Throughout the episode, you have hints thrown towards you how Loki starts growing fond of Sylvie, and then its stated directly by Mobius that Loki does indeed have developing feelings for her. It’s an interesting concept to touch upon as how Loki has been alone for most of his life but finds love in someone who is so similar to himself. To top it off the episode even ends with a perfect song choice as it has us excited for what comes next. Loki Episode 3 Song Dark Moon: From Artiste to Lyrics, Know More About Track Played During End-Credits of Tom Hiddleston’s Marvel Series.

(The above story first appeared on LatestLY on Jun 30, 2021 06:48 PM IST. For more news and updates on politics, world, sports, entertainment and lifestyle, log on to our website latestly.com).