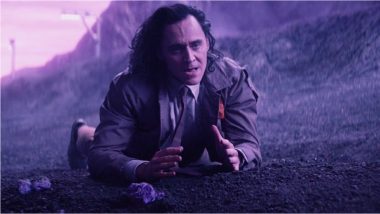 Loki, starring Tom Hiddleston and Owen Wilson, just had its fourth episode, and it packed a lot of surprises and twists that have us excited for the future of the show. Loki follows the titular character as he is brought in by the Time Variance Authority (TVA) for causing a fracture in the sacred timeline. He is then tasked to hunt down a fugitive Loki variant, by assisting Owen Wilson’s Mobius. The Loki variant turns out to be Sylvie played by Sophia Di Martino, who has her own plans of taking down the TVA. Loki Episode 4 Mid-Credit Scene Explained: What Happens in This Secret Scene in Tom Hiddleston’s Marvel Series? (LatestLY Exclusive).

With episode four of Loki, we got a lot of answers to the questions that we had from last week, and also included some new twists that will surely leave you excited for what’s to come. So here are five twists from episode four of Loki that will change your outlook on TVA. After Loki, 5 More MCU Characters We Are Waiting To See Come Out of Closet.

Return of Lady Sif (sort of)

For the first time since her last appearance in Agents of S.H.I.E.L.D in 2015, we saw Jaimie Alexander return to the role of Lady Sif in Loki. She is slated to appear next in Thor: Love and Thunder, but it was a delight to see Sif appear here as well, even if it was in a sort of a flashback. The scene involved Mobius sending Loki in a time loop where one of his old memories would be repeatedly played. The said memory involved Loki cutting off Sif’s hair which resulted in her calling him a “conniving, craven, pathetic worm” and after punching him in the face said that, “I hope you know you deserve to be alone and always will be”. This kept on going on in a loop until Mobius finally intervened.

Mobius gets to know that everyone in the TVA is a variant and had a life back in the sacred timeline, He goes on to free Loki but is then immediately met by Ravonna and her TVA agents. Mobius then goes on to tell her how he would wish to go back to his life before TVA, but before he is done speaking, an agent prunes him out of existence! Is this the last we see of the character?

The Timekeepers Being Androids

For long, fans had been speculating that the Timekeepers are just some elaborate lie made up by the TVA . When Sylvie throws a spear at one of their heads, it turns out that they were really androids. This has left us with a lot of questions as now we wonder who actually created the TVA. Loki Episode 2 Ending Explained: Who Is Lady Loki and How Did She Bomb the Sacred Timeline? (SPOILER ALERT).

In a shocking turn of events, when Loki is about to confess his feelings for Sylvie, Ravonna sneaks up and prunes him. This is a huge point in the show as we just saw the lead protagonist seemingly wiped out of existence and leaving Sylvie to lead the show.

While Loki being pruned did leave us shocked, what was more shocking was how he wakes up in a world that seems destroyed and is approached by four other Loki variants, one of whom is being played by Richard E Grant. It confirms what fans have speculated for a while that Grant might be playing a variant of Loki as well. This also brings up a theory that anyone who gets pruned might be just sent to an alternate world where other variants of themselves exist, which might hint at the fact that Mobius is still alive.

(The above story first appeared on LatestLY on Jun 30, 2021 04:35 PM IST. For more news and updates on politics, world, sports, entertainment and lifestyle, log on to our website latestly.com).