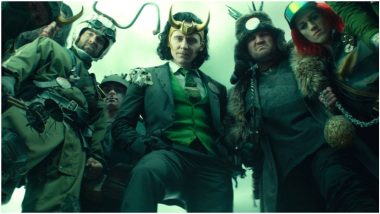 Loki just had its penultimate episode premiere, and oh boy was it an episode filled with some great revelations about the plot. Episode five of Loki follows Loki and his variants as they make their way across a post-apocalyptic land where pruned individuals are sent by the TVA and the terror of Alioth looms over them. It was a great episode that literally gave us a whole lot more of Loki. It provided us with a great setup for the final episode that will premiere next week and what else we can expect. Loki Episode 5 Ending Explained: Decoding the Major Character Death and the Final Reveal in the Trippiest Outing of Tom Hiddleston’s Marvel Series.

With just one more episode left to go, Loki episode five was filled with some great visuals, character reveals and story beats. So here are seven of the biggest revelations from Episode five of Loki that has us excited for the finale.

In the earlier episodes it felt like anyone that got pruned, just dies, but with the latest episode that doesn’t seem to be the case. While this was teased in the mid credits scene of the last episode, we got our confirmation with episode five that anyone who is pruned is sent to a desolate land. The land has a looming terror of a cloud like monster by the name of Alioth, who feasts on anyone who is sent over there by the TVA.

The Backstory of the Loki Variants

The main Loki that we follow was joined along by four other Loki’s as well. The Lokis consist of a kid Loki, classic Loki, boastful Loki and an Alligator Loki. The kid Loki caused his nexus event by killing Thor. The classic Loki caused his nexus event by leaving solitude in order to find his brother. The backstory for Alligator Loki and Boastful Loki weren’t mentioned, aside from the fact that Boastful Loki seems to fib about how he was able to acquire all six infinity stones in his timeline and beating Captain America and Iron Man, and Alligator Loki accidentally ate the neighbour's cat. Loki Episode 5 Recap: From Throg to Thanos Copter, Explaining the 10 Easter Eggs Marvel Fans Discovered in Tom Hiddleston’s Series.

In order to escape the TVA’s minutemen and in the search for answers, Sylvie prunes herself as she is sent to the desolate land too. Over there she has a brief encounter with Alioth where she is able to enchant him for a second and learns that he may be the clue behind the creation of TVA.

Mobius To The Rescue

While this was expected after the mid credits scene of the previous episode, it was still fun to see that our favorite jet-ski enthusiast was still fine and kicking well. In the episode he helps Sylvie escape from Alioth in a pizza car and finally is convinced that he has to take the TVA down as well to get to the bottom of everything. Where his storyline goes from here has us all excited about what might happen in next week’s episode.

Episode five of Loki also gave us the reveal of President Loki. This Variant of Loki leads a group of other variant Lokis and leads them to the bunker where the other five Loki are hiding. Betrayed by Boastful Loki as he gives away their location, Alligator Loki bites of President Loki's hand which leads to a hilarious brawl among all the Lokis.

At this point it feels like every character in Loki is as oblivious as the audience about what’s going to happen next. The people that you even expected to have the slightest idea of what’s going on, are just as oblivious as us. One of those characters being Ravonna, who now like Sylvie, is also after knowing the truth about who created the TVA. While this might be an elaborate ploy by her to just be dumbfounded about things still remains to be seen, but it has us excited for the final episode of Loki.

The Death of Classic Loki

Classic Loki was by far the highlight of this episode. In his final act as the God of Mischief was one the best moments in the show. In an effort to distract Alioth, Classic Loki is able to make an illusion of Asgard and it probably might be one of the best showcases of powers in the entirety of MCU. Coupled with some great visuals and an amazing performance by Richard E. Grant, Classic Loki goes out in an one final act of glorious purpose as he is devoured by Alioth.

In the last minutes of the episode, while classic Loki has Alioth distracted, Loki learns that he may be more powerful than he might have actually imagined. This leads to Sylvie and him trying to enchant Alioth together. Sylvie tells him that they are similar so he might be able to enchant beings as well which causes Loki to tap into his undiscovered powers. It results in him and Sylvie succeeding in enchanting Alioth and finding out that he was guarding a mansion that might lead to the origins of the TVA.

The final episode of Loki is scheduled to stream next Wednesday on Disney+ Hotstar Premium at 12:30 pm.

(The above story first appeared on LatestLY on Jul 07, 2021 06:04 PM IST. For more news and updates on politics, world, sports, entertainment and lifestyle, log on to our website latestly.com).