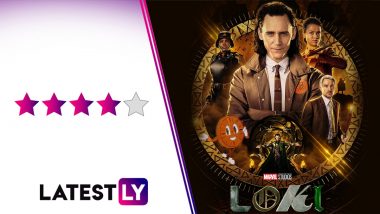 Loki Season 1 Finale Review: So Loki has become the first live-action Marvel's Disney+ series to get a second season. And it sure does need to, for the final episode of the first season ("For All Time. Always.") not only offers the key to the box of mysteries that it has been keeping in the shadows, but also directs us towards a new box of oddities that could affect the whole Marvel Cinematic Universe in future. Directed by Kate Herron, Loki stars Tom Hiddleston, Gugu Mbatha-Raw, Wunmi Mosaku, Eugene Cordero, Tara Strong, Owen Wilson, Sophia Di Martino, with Jonathan Majors making a special appearance in the season 1 finale. Loki Episode 6 Recap: Miss Minutes, Multiversal War, The Shocking Cliffhanger Ending and More - 8 Plot Twists From Season Finale of Marvel’s Disney+ Series.

(Some SPOILERS ahead) As we saw at the end of the last episode, Sylvie (Sophia Di Martino) and Loki (Tom Hiddleston) have defeated the Variant-eating, smoke-dog Alioth with the help of Classic Loki (guest star Richard E Grant). The defeat of Alioth showed them a castle that hides the person behind the creation of TVA.

The said person turns out to be someone who is hailed by Miss Minutes (Tara Strong) as He Who Remains. And he is played with a scenery-chewing enthusiasm by a fantastic Jonathan Majors, whose performance is filled with such energy as if he already seems to be aware that he scored an Emmy for Lovecraft Country. Considering that He Who Remains knows the past, the present and the future of every single living entity, who knows, that could be possible!

Of course, those who have been following Marvel closely, be it the comics, the many indicative Easter Eggs in the series itself or the speculative casting news, know that Majors is MCU's man to play Kang The Conqueror. Supposed to debut in Ant-Man and The Wasp: Quantumania, Feige drops a surprise on us by bringing him early, that too in a Disney+ series.

As already established in the series, we are dealing with multiple iterations of the same person, be it Loki or Mobius (Owen Wilson). Even He Who Remains says there have been variants of himself. So we are not sure if the character we will meet in Ant-Man and The Wasp: Quantumania is the same person we saw in the Loki finale.

But let's bench that discussion for later, all we have here is Marvel finally undoing the Mephisto fiasco of WandaVision by actually dropping a major Villain in a series. This makes Loki quite important for the future of MCU, especially with how the episode ends. After what happens at the end of WandaVision and now Loki, Doctor Strange surely has his hands full of mind-boggling tangled knots when he deals with his Multiverse of Darkness!

The finale of Loki season 1 felt a rather subdued episode compared to the fifth one, that gave us multi-Loki brawl which included an alligator, the resurrection of Asgard as a grand illusion, to the fight with a giant smoky dog! It began with an awesome panning shot of the space-time vortex where voices of Greta Thuberg, Maya Angelou, Malala and the late Nelson Mandela are heard, as the camera settles to the castle that stands at the End of Time. Or rather, the End of Time, that He Who Remains has kept a tab on.

If you are curious as to why Marvel made the above real-life celebs canon in the intro scene, you would realise they have certain things in common. They are the rare voices to speak out against system and oppression. Why is easier for the fans to draw parallels to Sylvie's dilemma. Loki might be named after the one we have known since Thor, but the series is being transformed into a Sylvie stronghold, and we don't mind that. Sylvie turns into the rebellious socialist fighting for free will when the world around wants benevolent fascism (if that's even a thing) to take care of a crumbling democracy.

Marvel movies and even series are known to add topical political commentary, from minority oppression to black rights to interference in a foreign land. Loki has never been any different, drawing parallels of the workings of TVA's with the systemic fascist oppression, where the pruning of the unwanted is told to be needed for the smooth functioning of the world. The conversation that He Who Remains has with the two Lokis, while making the episode quite chatty and veering close to the infamous Architect scene in The Matrix Reloaded (Thank Marvel for Majors' arresting act that it doesn't become that), shed a lot of light on the debate of free will and control of that in the name of suppressing chaos. It is easy to read between the lines, and credit must be given to Herron and her writing team for keeping it within the spirit of comic-book realm and not overtly making it political. Loki Episode 6 Ending Explained: Decoding Jonathan Majors’ Villain Reveal, the Political Connect and What It Means for Season 2 and Future of MCU.

Even otherwise, the episode apty handles the contradictions between the two Lokis (the kiss, while long expected, still felt creepy), clearly bringing out their diverse aspirations even if they are basically the same. The conclusion is absolutely exhilarating and shocking, and raises stakes not just for the next season of Loki, but also for Marvel Cinematic Universe in general. Also, the cinematography, the background score and the VFX continue to be top-notch.

- A terrific finale to a great show

- Can be a bit chatty than needed

Loki finale is definitely a departure for Marvel Cinematic Universe with no battling a giant beam in the sky (though there is a space castle), an exciting villain reveal right in the climax (and not making it feel forced), and a proper cliffhanger conclusion that sets the course for the franchise's future. Also Jonathan Majors makes a smashing debut here! All six episodes of Loki are streaming on Disney+ Hotstar.

(The above story first appeared on LatestLY on Jul 14, 2021 08:49 PM IST. For more news and updates on politics, world, sports, entertainment and lifestyle, log on to our website latestly.com).