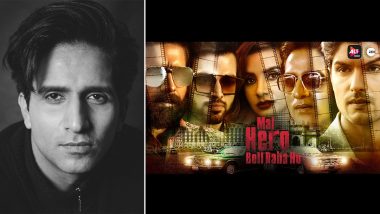 Actor Arslan Goni plays the gangster Lala in the action series Mai Hero Boll Raha Hu. The actor says portraying negative characters is never easy. "Lala is an extremely challenging and a fun character to play. Imagining and attempting to portray a dare-devil gangster from the early nineties was quite a challenge, and I enjoyed every minute of learning and growing with it," he says. Mai Hero Boll Raha Hu Trailer: Parth Samthaan, As Dashing Nawab, Will Have To Choose Between Mumbai Or Laila In This Gritty Gangster Drama (Watch Video).

In the show, Lala is shown to be arrogant, cunning and jealous. He was quite the leader of Mumbai, until Nawab, essayed by Parth Samthaan, shows up. "Bringing out Lala's frustration and jealousy was fun. I enjoyed working with my co-stars and the rest of the crew. It truly was an incredible experience," says Arslan. Main Hero Bol Raha Hu: Parth Samthaan and Patralekhaa’s Web-Series to Premiere on April 20 on ZEE5!

The show stars Patralekha, Ganesh Yadav and Ankit Gupta. It will stream on ALTBalaji and ZEE5.

(The above story first appeared on LatestLY on Apr 14, 2021 09:31 PM IST. For more news and updates on politics, world, sports, entertainment and lifestyle, log on to our website latestly.com).