Rudra The Edge of Darkness: Esha Deol Reveals She Is a Big Fan of Idris Elba Who Featured in the International Version Luther

A remake of the successful British series Luther, the series is an engaging and dark take on a cop's journey of uncovering truths and bringing victims justice. Rudra - The Edge of Darkness will be available exclusively on Disney+ Hotstar from March 4 in Hindi, Marathi, Tamil, Telugu, Kannada, Malayalam and Bengali. 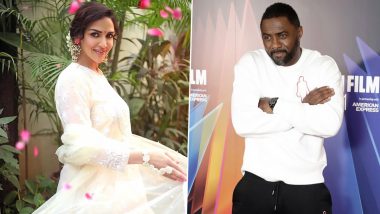 Actress Esha Deol, who will be seen in the Hindi adaptation of the popular British series 'Luther' titled 'Rudra - The Edge of Darkness', says she is a big fan of star Idris Elba, who featured in the international series. The crime thriller is headlined actor Ajay in an intense avatar of a cop for the first time in a series. Spanning across six episodes is produced by Applause Entertainment in association with BBC Studios India. It also features a stellar cast including Raashi Khanna, Atul Kulkarni, Ashwini Kalsekar, Tarun Gahlot, Ashish Vidyarthi, and Satyadeep Misra in pivotal roles. Rudra – The Edge of Darkness: All You Need To Know About Luther, Idris Elba’s Series That Inspired Ajay Devgn’s OTT Debut on Disney+ Hotstar.

Esha, who is all set to mark her digital debut with this exciting crime thriller is really excited for the release of the series. Talking about how she is keenly looking forward to her digital debut, she shares, "I am really eagerly waiting for Rudra to release because it's something that has been shot on a large scale and our audience are gonna enjoy watching the show and the entire journey of all of us in the show, all our characters are beautifully woven. It's a very edgy thriller, Ajay Devgn, AJ in my words it's his digital debut so this is something that I am extremely excited about to be debuting alongside Ajay in a web series."

She reveals why she chose 'Rudra: The Edge of Darkness'. "Well, I have been a huge fan of Idris Elba, to begin with, I, have seen Luther, it's a fantastic show and just to know the fact that they are making it here in India, that too with Ajay was an exciting choice to make for me and of course, the character, the role that I play as his wife is a very very interesting role, and the entire setup, Applause, BBC, Disney+ Hotstar, so it just felt right to do at this point of time." Rudra The Edge Of Darkness Trailer: Ajay Devgn Looks Intense In His Debut Web Series; Raashi Khanna, Esha Deol’s Crime-Thriller To Premiere On Disney+ Hotstar (Watch Video).

A remake of the successful British series Luther, the series is an engaging and dark take on a cop's journey of uncovering truths and bringing victims justice. It will see Ajay's titular character of an intuitive and instinctive police officer fighting for the truth in darkness as he wades through a grim and complex web of crimes and criminals and corruption with a wrathful, steely grit. 'Rudra - The Edge of Darkness' will be available exclusively on Disney+ Hotstar from March 4 in Hindi, Marathi, Tamil, Telugu, Kannada, Malayalam and Bengali.

(The above story first appeared on LatestLY on Feb 21, 2022 06:09 PM IST. For more news and updates on politics, world, sports, entertainment and lifestyle, log on to our website latestly.com).