Rudra – The Edge of Darkness: All You Need To Know About Luther, Idris Elba’s Series That Inspired Ajay Devgn’s OTT Debut on Disney+ Hotstar 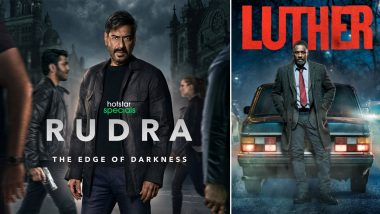 Well, now if you are curious to know what's Luther all about that made Ajay give a green signal to the project? Fret not, as we've got you covered. As, here's all you need to know about Ajay Devgn's upcoming web series that's inspired by BBC One's show. Check it out. Rudra The Edge Of Darkness Trailer: Ajay Devgn Looks Intense In His Debut Web Series; Raashi Khanna, Esha Deol’s Crime-Thriller To Premiere On Disney+ Hotstar (Watch Video).

Luther is a British psychological crime drama television series that stars Idris Elba as the lead. The story of the crime series revolves around a detective and a psychopath murderer, who become friends and solve many thrilling cases together.

Luther is a series that sees Idris Elba as DCI John Luther and Ruth Wilson as Alice Morgan. Apart from the two, it also stars Michael Smiley, Warren Brown and more.

Ajay Devgn's Rudra - The Edge of Darkness will stream on Disney+ Hotstar VIP on an unknown date that is yet to be announced. The series will soon be going into production and will be shot across iconic locales of Mumbai. The actor will be seen in an intense and gritty avatar. So, are you excited to see Ajay in the shoes of Idris Elba? Tell us your view in the comment section below. Stay tuned!

(The above story first appeared on LatestLY on Jan 29, 2022 03:28 PM IST. For more news and updates on politics, world, sports, entertainment and lifestyle, log on to our website latestly.com).