Sanjivani 2 February 25, 2020 Written Update Full Episode: NV Reveals the Truth About Sid’s Condition to Ishaani and Even Saves Her From Grave Danger

NV goes to Sanjivani and admits Ishaani. Rahil asks what happened but NV asks him to treat her first. Rahil asks him not to panic and checks on Ishaani. Sid is in his wheelchair roaming on the corridor on his way to have vada pav. He finds NV and Rahil treating someone but couldn’t see their face and leaves. 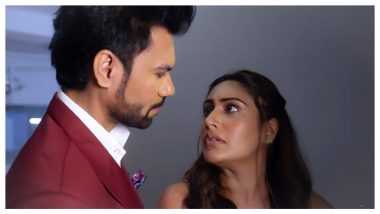 In yesterday’s episode of Sanjivani 2, NV and Ishaani perform the Mahashivatri puja as a couple. While he learns some devastating news concerning Sid, Ishaani gets suspicious of his behaviour. In tonight’s episode, we see Ishaani (Surbhi Chandna) coming home confused about NV ‘s (Gaurav Chopra) behaviour. She’s sure that he’s hiding something and wonders what it is. Bebe greets her and shares her happiness about NV finding the best doctor for Sid (Namit Khanna). She says that she has googled about Mehta and is very happy that NV brought him to cure Sid. Sanjivani 2 February 24, 2020 Written Update Full Episode: NV Looks Uncomfortable While Performing Puja With Ishaani During Mahashivratri.

Ishaani agrees and says that it’s really difficult to get Mr Mehta’s appointment. Ishaani wants to thank but wonders how. She decides to make pakoras for him as he likes it. She asks for Bebe’s help as she doesn’t know to cook. Bebe thinks that this is the right way to bring Ishaani and NV closer and acts like she’s not well and leaves for her room. Ishaani decides to do it browsing the net. She makes everything ready for making pakoras. NV comes there. He gets startled at seeing Ishaani in the kitchen. Ishaani says that she wants to thank him with pakoras for bringing Mr Mehta. Sanjivani 2 February 20, 2020 Written Update Full Episode: Ishaani Demands For Divorce From NV.

NV feels guilty for hiding about Sid’s real condition to Ishaani. He decides to reveal it to her soon. He starts making coffee with pakoras. NV makes coffee while Ishaani makes pakoras. Ishaani after completing takes the pakoras to the table. She finds Sid’s file and takes it and starts reading it. She realizes that Sid can never be cured and gets shocked. She feels to be cheated by NV. She calls him betrayer and asks if he agreed to give divorce as he knows that Sid can never be cured. She panics and blames NV for cheating her.

NV tries explaining but she doesn’t listen and runs away. She says to herself that everyone is cheating on her. First, it’s Sid and now NV. She decides to go far away from both. She starts feeling dizzy. NV runs searching Ishaani and asks about her to everyone but none seems to know. Ishaani walks despite being dizzy. She finds a vehicle approaching her but she couldn’t move. NV sees it and saves her at the nick of time. He says that how could she do this as without her there’s nothing in his life. He picks her up and rushes to the hospital.

NV goes to Sanjivani and admits Ishaani. Rahil asks what happened but NV asks him to treat her first. Rahil asks him not to panic and checks on Ishaani. Sid is in his wheelchair roaming on the corridor on his way to have vada pav. He finds NV and Rahil treating someone but couldn’t see their face and leaves. Rahil asks NV to not to panic as she just fainted due to stress and blood pressure. He says that she will be alright soon. He gets surprised seeing the calm NV so much hyper about Ishaani.

Dr. Mehta comes there and NV takes him to the cabin to not disturb Ishaani. He says that he has tried all possible ways but nothing could save Sid. NV thinks that it shouldn’t happen as if Sid doesn’t get cured then Ishaani’s hope will get shattered.

In the precap, NV says Mehta that Ishaani will not assist him with Sid’s surgery shocking Ishaani.

(The above story first appeared on LatestLY on Feb 25, 2020 05:38 PM IST. For more news and updates on politics, world, sports, entertainment and lifestyle, log on to our website latestly.com).