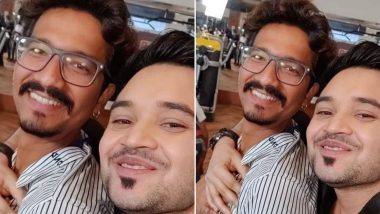 Actor Srman Jain, known for his roles in shows like "Saas Bina Sasural" and "Adaalat", has joined the cast of Harsh Limbachiyaas "Funhit Mey Jaari". The actor feels comedy shows bring in a lot of positivity, especially in difficult times like these. Talking about the show, he said: "The title says the show is for the audience and for their entertainment. The spoofs will make the audiences laugh. It will bring relief in this current corona times. Comedy shows bring in a lot of positivity and make people forget their stress." Kabir Singh Actress Geetika Mehandru Joins Choti Sarrdaarni.

He calls Sunil Grover and Bharti Singh as brilliant comedians, but says that his all-time favourite actor is Sumeet Raghavan. "His comic timing is too good. In ‘Sarabhai v/s Sarabhai', he was subtle yet so fantastic. I would like to do such a show for sure." Khatron Ke Khiladi Reloaded Is Happening: Nia Sharma Roped In To Join Rashami Desai and Sidharth Shukla In The Adventure Reality Show?

Srman says as an actor he is learning something new every day. "When you are surrounded with actors like Krushna Abhishek, Mubin Bhai, Bharti Singh, you are learning so many things. I just believe in giving hundred percent to any role," he said.

(The above story first appeared on LatestLY on Jul 08, 2020 12:12 PM IST. For more news and updates on politics, world, sports, entertainment and lifestyle, log on to our website latestly.com).