Sanjay Kapoor has fond memories of shooting for his new web series The Last Hour in Sikkim. Not just the place, even the people of Sikkim are so good. They make the place special. They are kind and warm, the actor told IANS. 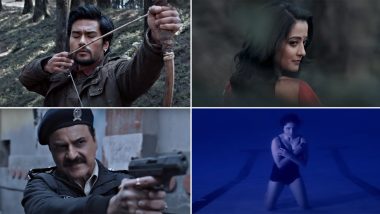 Sanjay Kapoor has fond memories of shooting for his new web series The Last Hour in Sikkim. Not just the place, even the people of Sikkim are so good. They make the place special. They are kind and warm, the actor told IANS. He has an interesting recall shooting for the show. "We shot amidst freezing cold weather in Sikkim and it was a tough shoot, but our shoot did not end there. The Last Hour Review: Sanjay Kapoor and Raima Sen’s Web-Series Is Dull Despite the Fantasy Elements (LatestLY Exclusive).

After shooting under the freezing cold for 90 days in Sikkim, wearing multi-layered clothes including heavy jackets, we had to shoot under the scorching heat of Mumbai wearing the same clothes! I do not know which was more difficult, the extreme cold or the extreme heat. It was tough in Mumbai I guess because you do not sweat in Sikkim at all, and to maintain continuity we were not supposed to sweat on-screen! The Last Hour: Raima Sen Recalls Giving a Screen Test for Her Role in the Upcoming Amazon Prime Video’s Series.

I remember how I felt those drops trickling down from my neck and back, but I had to keep a straight face! As long as it was not visible on-screen, all is fine with us actors," he said with a laugh In the show he plays investigating officer Arup Singh, who goes to Sikkim to probe a mysterious death. The show also features Karma Takapa as a man with supernatural power.

Being a Sikkimese who is excited about playing a pivotal role in a Hindi show and sharing screen space with multiple Bollywood actors, Karma shared he had more reasons than one to be part of the murder mystery. "When I finished reading the entire screenplay at one go, what was very fascinating and intriguing was its characterisation.

My character Shaman has a special power to see what happened to a dead human being, just one hour before his or her death, but he is also a real character with a real problem in life. He has his insecurities -- the fact that he jostles between fulfilling his duty and giving in to a desire he has. This makes the character complex and interesting at the same time," shared Karma.

(The above story first appeared on LatestLY on May 17, 2021 02:31 PM IST. For more news and updates on politics, world, sports, entertainment and lifestyle, log on to our website latestly.com).