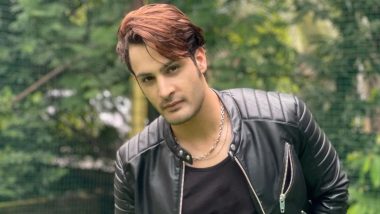 We are just a few hours away from the premiere of the most awaited reality show, Bigg Boss Season 15. Umar Riaz is one of the contestants who will be entering the BB House tonight, and even before him entering the house, the Bigg Boss contestant is creating quite a buzz online. While it has already been established that Umar is Bigg Boss 13 contestant, Asim Riaz's brother, not many know that he was a doctor by profession before he turned actor-model. He is elder to Asim, and was quite active during BB13 while supporting his younger brother. Bigg Boss 15 Confirmed List Of Contestants: Shamita Shetty, Karan Kundrra, Jay Bhanushali, Umar Riaz And Many More.

While Asim was inside the Bigg Boss House, Umar was handling his brother's Instagram account. He gained popularity for handling Asim’s social media very well. Moreover, the actor is very active on social media himself. He attracts quite a few female fans because of his good looks and physique. Born and brought up in Jammu, the model is a fitness freak. He is also rumoured to be dating actress Sonal Vengurlekar.

Umar completed his schooling and then went on to pursue MBBS from Government Medical College in Jammu. He reportedly started practising as a senior doctor at Sir H N Reliance Foundation Hospital And Research Centre in Mumbai. His passion and interest, however, has always been acting and modelling. The actor has been a part of music videos alongside popular TV actress Dalljiet Kaur and Bigg Boss 12 fame Saba Khan. He also continues to practice as a doctor too. Tejasswi Prakash in Bigg Boss 15: Career, Love Story, Controversies – Check Profile of BB 15 Contestant on Salman Khan’s Reality Show!

Take A Look At Some Of His Instagram Posts Below:

Bigg Boss 15 confirmed contestants list includes Umar Riaz, Donal Bisht, Shamita Shetty, Nishant Bhat, Simba Nagpal, Akasa Singh and Pratik Sehajpal, among others. Ahead, Salman Khan's reality show's promo has further revealed glimpses of a few contestants which hint they are Karan Kundrra and singer Afsana Khan. Salman Khan's Bigg Boss 15 is all set to premiere on Colors TV on October 2 (Saturday). You can watch the controversial reality show on Saturday and Sunday at 9:30 pm and from Monday to Friday at 10:30 pm.

(The above story first appeared on LatestLY on Oct 02, 2021 12:34 PM IST. For more news and updates on politics, world, sports, entertainment and lifestyle, log on to our website latestly.com).