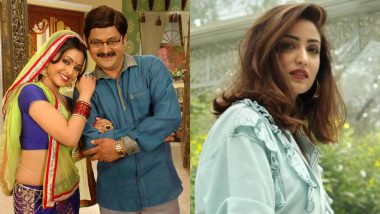 Yami Gautam says her family loves to watch the comedy show, Bhabiji Ghar Par Hain. If you remember properly, Yami started her career on Indian TV. She's one of the rare actors in India who have made a successful transition from TV to movies. Her Ginny Weds Sunny co-star Vikrant Massey is also one of them. Earlier, Vikrant was doing supporting roles in movies like Lootera, but over the years he has acted in movies like Death in the Gunj, Chhappak. Yami has starred in blockbusters like Kaabil and Bala. Saumya Tandon Gets a Beautiful Farewell From Bhabiji Ghar Par Hain Cast (Watch Video).

But, Yami has not watched anything on TV for the longest time. In an interview with The Indian Express, she said she didn't even get time to watch her own show when she was working in TV. But she added, "There’s one show called Bhabiji Ghar Par Hain which my family loves to watch. The show has some fine actors and very funny content."

"As far as going back to television is concerned, I don’t know if the creative work I’m looking for fits in this world. But as they say, never say never because you might find something so interesting that blows you away. Like when Mr Amitabh Bachchan made his (TV) debut with KBC, it was a historic moment. That show reached so many people. So, you never know what might come up," Yami added.

Vikrant has starred in shows like Dhoom Machao Dhoom, Balika Vadhu, Qubool Hai. "I’ve done television for 10 years, my soul still belongs to that platform. I truly believe I am what I am because of it. But it’s a very disheartening scenario and I’ve admitted this earlier too. Considering the kind of regressive content we are seeing on television, at least in terms of daily soaps, I don’t see myself being a part of such a narrative," he said. Ginny Weds Sunny Movie Review: Vikrant Massey’s Comic Flair Makes This Tired Netflix Romcom With Yami Gautam Watchable.

"I am hopeful we will revisit the glorious days of Nukkad, Byomkesh Bakshi, Buniyaad or Mirza Ghalib or the times when good content was being made," Vikant concluded.

(The above story first appeared on LatestLY on Oct 09, 2020 09:03 PM IST. For more news and updates on politics, world, sports, entertainment and lifestyle, log on to our website latestly.com).