Unlock 5: Multiplexes and Single Screens to Finally Re-open from October 15 with 50% Capacity 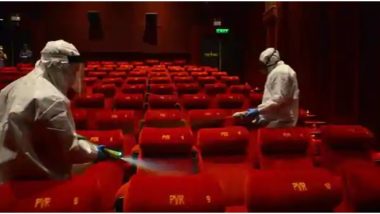 Yes, it is finally happening! Theatre chain owners can finally heave a sigh of relief as the centre has agreed to re-open them from October 15. As per the new guidelines issued by Ministry of Home Affairs, multiplexes and single screens theatres will be allowed to re-open after a long gap of almost six months. The cinema industry suffered the most amid the lockdown and the government has finally decided to erase all their worries. Of course, the reopening comes with a big catch. First INOX, Now PVR Disappointed With Films Going Directly to Streaming Platforms.

As per the new guidelines, theatres chains can only function at 50 per cent capacity for now. This would ensure all the safety precautions and social distancing measures are in place. The multiplex association of India had earlier drafted a fool-proof plan that included timely sanitisation of theatre premises and digitisation of the ticket booking process so as to minimise all the human contact. With the centre finally giving its approval, we can expect some big releases to hit the big screens during the upcoming festive season.

- Cinemas/ theatres/ multiplexes to open with up to 50% seating capacity from October 15.

Maharashtra government has meanwhile not allowed reopening of theatres in the state. In the new guidelines issued by Uddhav Thackeray led government. the ban on multiplexes and auditoriums continues to remain in effect.

Ranveer Singh's '83 and Akshay Kumar's Sooryavanshi are among the major names that are expected to hit the screens in Diwali and Christman weekend this year, now that theatres are allowed to re-open. The shutdown on cinema houses was earlier announced in March 2020. Their reopening also means if we'll be able to watch Christopher Nolan's Tenet on the big screens. India was among the few countries where Warner Bros couldn't release this Nolan marvel. But now with new guidelines in place, they will certainly have a chance to mint money at the Indian box office.

(The above story first appeared on LatestLY on Sep 30, 2020 08:32 PM IST. For more news and updates on politics, world, sports, entertainment and lifestyle, log on to our website latestly.com).