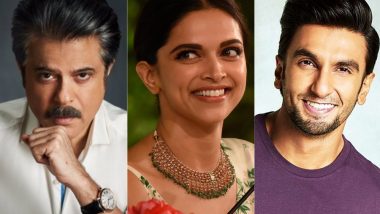 Yes, you heard that right. Ranveer Singh might be telling on all platforms that he feels lucky to have married the most beautiful woman in the world. The actor's uncle and Dil Dhadakne Do co-star feels that Deepika Padukone has found the best partner in life. Apparently, when Deepika had visited the sets of Zoya Akhtar's film, Anil met Deepika and doled out some solid relationship advice to the actress. Ranveer Singh Says Wifey Deepika Padukone Is a Good Influence on an ‘Undisciplined Person’ Like Him.

Anil reminisced the episode on No Filter Neha recently and said, "I remember on the sets of Dil Dhadakne Do when Deepika came to meet him (Ranveer Singh) and we were going on the ship. So she was there and I was like – chodna matt isko. Yeh ladka superb hai yaar. Perfect choice! You can’t get a better boy." Well, looks like Deepika did pay heed to Anil Kapoor's suggestion and the couple recently got married in an intimate ceremony.

There were reports suggesting that Sr Kapoor was upset because he and his family were not invited for the Italy wedding ceremony. However, the actor denied these reports and was seen chilling abroad. In fact, Anil and daughter Rhea were the only two people from their family to attend Ranveer-Deepika's starry reception bash in Mumbai. Anil made and entry with director Farah Khan, while we caught Rhea chilling with Janhvi Kapoor, Khushi and Anshula backstage.

Anil Kapoor was also asked about Arjun Kapoor's relationship with Malaika Arora and the actor neither confirmed or denied the reports. However, he did say, "I know him very well. Whatever makes him happy, makes me happy. I don’t want to comment on anything as that’s personal... whatever he does. We all family members have believed in that whatever makes the other person happy, makes us happy."

That's not all, Anil also had some advice for newest Bollywood couple Alia Bhatt and Ranbir Kapoor, he said, "They look great and happy together. They should spend as much time together as possible."

Well, Anil Kapoor certainly is one man who speaks from his heart and we must say that we love his candidness.

(The above story first appeared on LatestLY on Dec 06, 2018 08:30 AM IST. For more news and updates on politics, world, sports, entertainment and lifestyle, log on to our website latestly.com).