Odisha, one of the most cyclone-prone states, has suffered economic losses and critical infrastructure damages worth thousands of crores in the past few years because of recurrent and severe cyclones 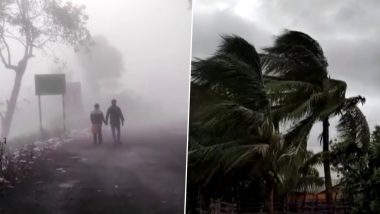 Ahmedabad, May 16: The damage caused to power transmission and distribution systems due to the increased frequency and intensity of cyclones triggered by climate change and their consequent impact at various levels is a major cause of concern in the coastal regions of India.

Odisha, one of the most cyclone-prone states, has suffered economic losses and critical infrastructure damages worth thousands of crores in the past few years because of recurrent and severe cyclones. In such scenarios in coastal regions, power supply is the most significant infrastructure because it directly affects the functioning of other essential systems such as communication, water supply, transportation etc.  Cyclone Asani Impact: Several Parts of Kolkata Receive Rainfall As Effects of Cyclone Asani Seen (See Pics)

Taking understanding of this grave scenario, a team of researchers at the Indian Institute of Technology Gandhinagar (IITGN) comprising Surender V. Raj, Udit Bhatia and Manish Kumar studied Odisha's power transmission network damaged during Cyclone Fani in 2019, with a focus on the vulnerability of individual towers to strong winds generated during cyclones.

The researchers developed a comprehensive framework that can help curtail overall losses in the functionality to a substantial extent. The findings of their work have been recently published in the International Journal of Disaster Risk Reduction (IJDRR).

The team assessed the damage probabilities for more than 41,000 power transmission towers. Subsequently, a series of simulated realistic cyclone scenarios were created to study the functionality of the transmission system and estimate the population that can get affected due to a range of cyclone scenarios.

The research team observed that the loss in functionality of transmission towers depends considerably on the location of the landfall of the cyclone. The damage is greater if the landfall is close to a region with many substations in the vicinity.

This observation emphasises the need to consider the orientation of the network with respect to the coastline and the realistic properties of the cyclones. The researchers also noted that a simulated cyclone trajectory indicates that it could damage towers even up to 300 km apart from each other.

Damage to power transmission lines at a larger scale leads to a significant and sudden loss of connectivity, consequently increasing the magnitude and duration of disruption in the aftermath of the cyclone, which can sometimes hinder the rescue operations as well.

The framework developed by the team helps in prioritising the towers that should be strengthened to minimise the overall losses in functionality in a cost-effective manner. They used damage-cum-wind speed data to develop a fragility model for towers, which helps assess the functionality of the network and the influence of strategic interventions on the same.

The team found that the most efficient strategy could be to pick a fraction of towers from the highest wind speed zones (according to the Indian standards) that are associated with substations serving a large population.

The study results revealed that a greater number of reinforced towers or a greater level of strengthening in them based on the tailor-made and efficient reinforcement prioritisation strategies in a particular region lead to better functionality of power transmission systems.

(The above story first appeared on LatestLY on May 16, 2022 07:51 PM IST. For more news and updates on politics, world, sports, entertainment and lifestyle, log on to our website latestly.com).