CBSE Class 10th, 12th Exams Cancelled in Punjab Due to April 2 Bandh Will be Held on April 27

Meanwhile, the CBSE Class 12 economics paper will be re-conducted for candidates across the nation on April 25. 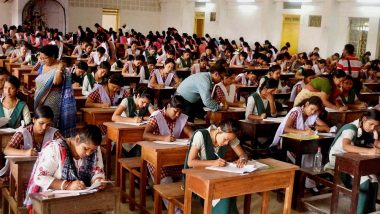 Candidates are recommended to log-in at bseh.org.in before 12 noon, and keep their roll number and other details in hand | Representational Image (Photo Credits: PTI)

Chandigarh, April 10: The Central Board of Secondary Education (CBSE) on Tuesday announced the dates for Class 10th and 12th exams which were cancelled in Punjab during the Bharat Bandh on April 2. The exams would now be held on April 27.

Among examinations which will be re-conducted include Class X French, Sanskrit and Urdu Course-B, along with Class XII Gujarati, Nepali, Kashmiri, Hindi- Elective and Core exams.

Meanwhile, the CBSE Class 12 economics paper will be re-conducted for candidates across the nation on April 25, after the Board found that the paper which was attempted by the students in the exam held last month was leaked.

The education body had also announced re-examination of Class X Mathematic paper after the alleged leak. But the order was later rescinded, bringing respite to over 13 lakh students who appeared for the exam.

Investigation conducted in the Class XII paper leak case led to the arrest of 3 people from Himachal Pradesh on Saturday. Earlier in the month, the Jharkhand police also busted an interstate paper leak racket, run by three individuals, including a coaching institute head.

Javadekar, while addressing the press on the issue, said steps would be enacted to prevent such incidents in the future.

(The above story first appeared on LatestLY on Apr 10, 2018 08:20 PM IST. For more news and updates on politics, world, sports, entertainment and lifestyle, log on to our website latestly.com).