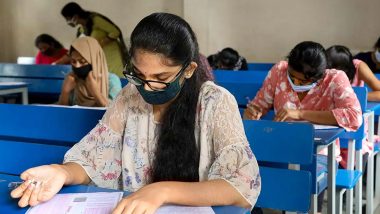 Bengaluru, June 8: The Common Entrance Test (CET) for several vocational courses in Karnataka, including engineering, is scheduled to be conducted on August 28 and 29, 2021. The registration for the KCET 2021 will begin on June 15. During a press conference, Karnataka Deputy Chief Minister CN Ashwath Narayan said that the exams will be held on  August 28 and 29 and each subject will have 60 marks. "The CET exam will take place on August 28 and 29. Each subject will carry 60 marks," Narayan said at a press conference on Tuesday.

The Karnataka Common Entrance Test (KCET) 2021  had earlier been deferred given the current COVID-19 situation. The exams will now be held in August 2021 at 500 centers across the state.  According to a report by NDTV, Karnataka had last week announced the cancellation of the second-year Pre-University (Class 12) exams but said that Secondary School Leaving Certificate (SSLC or Class 10) exams in the state will be held in July only for two papers.

(The above story first appeared on LatestLY on Jun 08, 2021 04:52 PM IST. For more news and updates on politics, world, sports, entertainment and lifestyle, log on to our website latestly.com).