The 25-year-old's bullet-ridden body was recovered from Gusoo in Pulwama on Friday. 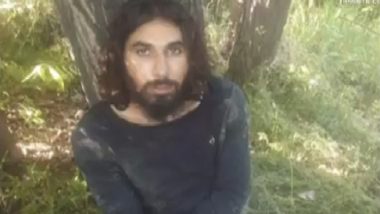 Aurangzeb was abducted last evening in Pulwama region while he was heading back home for Eid celebrations | (Photo Credits: CNN-News 18/Screengrab)

Srinagar, June 15: The final image of Indian Army jawan Aurangzeb before being killed has been released by the terrorists. Aurangzeb, posted with the 44 Rashtriya Rifles, was kidnapped and murdered by the militants on Thursday.

The 25-year-old's bullet-ridden body was recovered from Gusoo in Pulwama on Friday. Aurangzeb, a native of Poonch region of Jammu & Kashmir, was abducted by the militants after he was heading home for Eid celebrations.

A state funeral was arranged for the burial of Aurangzeb. Hundreds arrived at the funeral held in Poonch's Mendhar region. The gathering also raised slogans against Pakistan, which is accused of ideologically and financially sustaining the insurgency in the Valley.

Here is the final image of Aurangzeb shared by CNN-News 18:

#BREAKING - Terrorists release picture of soldier Aurangzeb before he was killed. @shreyadhoundial with more information. pic.twitter.com/hr4SDn3R7b

Shortly after Aurangzeb's abduction yesterday, senior Kashmir reporter and editor of English daily Rising Kashmir was shot to death by bike-borne militants outside his residence in Srinagar.

The killings shook the conscience of the entire Valley, with the militants being condemned from all socio-political corners. "Deeply saddened and shocked by the tragic news of Shujaat Bukhari's killing. Such inhumanity is unpardonable and condemned in the strongest terms. Proud son of the soil (sic), his death is a huge loss. Shujaat was an erudite intellectual, a fearless journalist and above all a selfless human deeply concerned for his people. My heartfelt condolences to his bereaved family," tweeted Hurriyat leader Mirwaiz Umar Farooq.

(The above story first appeared on LatestLY on Jun 15, 2018 08:57 PM IST. For more news and updates on politics, world, sports, entertainment and lifestyle, log on to our website latestly.com).