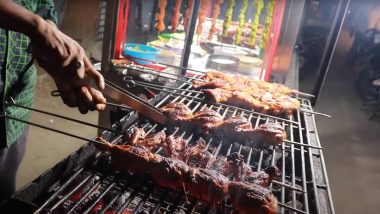 Ahmedabad, November 14: A political functionary in the Ahmedabad Municipal Corporation (AMC) on Saturday sought a ban on the sale of non-veg food on the streets. AMC Revenue Committee Chairman Jainik Vakil wrote to the Municipal Commissioner and the Standing Committee and demanded a ban on the sale of non-vegetarian food on roads, reported The Indian Express. Vakil said that encroachment by illegally proliferating non-vegetarian food carts on city's public roads should be cleared. The development came after Vadodara, Rajkot and Junagarh civic bodies restricted the public display of all non-vegetarian food being sold on streets. Vadodara: People Complain About Eyes Itching Due to Street Vendors Cooking Non-veg Food Openly; Deputy Mayor Nandaben Joshi To Take Action.

"Keeping in mind Gujarat's identity and Karnavati (Ahmedabad) city's cultural tradition, it is important to immediately clear encroachment by illegally proliferating non-vegetarian food carts on city's public roads, religious and educational places…  due to sale of meat, mutton and fish in public places citizens cannot move on roads," reported the media house quoting an excerpt from the letter written by Vakil. He further added that due to the sale of meat on the streets of Ahmedabad, residents' religious sentiments are also hurt. Vadodara: Municipal Corporation Issues Notification to Restrict Display of Non-veg Food in Street Stalls, Restaurants.

Vakil also said that civic body should take action against such outlets under provisions of the GPMC Act including Sections 331 (2), 334 and 335. However, there is no unanimity in the Bharatiya Janata Party (BJP) over the issue. State BJP Chief CR Paatil asked the civic bodies to set aside the announcements. Paatil told The Sunday Express that he had talked to authorities in the Vadodara and Rajkot civic bodies and asked them not to remove carts selling non-vegetarian food on the streets.

Notably, on Friday, Vadodara Municipal Corporation on Friday issued a notification to restrict the public display of all non-vegetarian food being sold on the street food stalls or restaurants. Deputy Mayor Nanda Joshi told news agency ANI, "The corporation had received complaints from the people passing by shops or stalls where non-vegetarian food is displayed in open." She further said that the process of implementing the rule will be issued after discussing it with stakeholders.

(The above story first appeared on LatestLY on Nov 14, 2021 11:25 AM IST. For more news and updates on politics, world, sports, entertainment and lifestyle, log on to our website latestly.com).