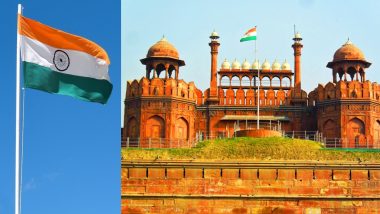 Delhi, August 15: India is celebrating its 75th Independence Day today, i.e. August 15, as the nation got freedom from century-long British rule in August 1947. Since then, August 15 is celebrated by the Indians, both in India and Abroad, with great grandeur and fervour. As we gear up to celebrate the 76th Independence Day, it is crucial to remember the importance of this day, the history of our nation, and the sacrifices our freedom fighters made to gain freedom from the clutches of the British Empire. As we celebrate Independence Day 2022 on Monday, here's a look at live streaming options to watch the live telecast of the 75th Azadi Diwas celebrations including flag hoisting and PM Narendra Modi's speech from the Red Fort.

The Prime Minister of India, Narendra Modi will hoist the national flag and will address the nation, carrying forward the legacy established by the first PM of India, Pandit Jawaharlal Nehru, who raised the national flag above the Lahori Gate of Red Fort in 1947. Why Does India Celebrate Independence Day on August 15? Know History Behind Why THIS Date Was Chosen Specifically.

Ahead of the address, PM Modi will be given the Guard of Honour by the Delhi Police and the armed forces, followed by the national anthem. Following this, the unfurling of the tricolour will take place, followed by the ceremonial 21-gun salute. Unlike previous years, the 21-gun salute will be accorded by the indigenously built and designed Advanced Towed Artillery Gun System (ATAGS) this time around. Shortly after, PM Modi will address the nation.

Following PM's speech, the Independence Day parade will take place. The PM's address and the parade can be viewed on state-owned Doordarshan and Sansad TV. The speech and parade will be telecasted live on youtube channels of DD News and Sansad TV.

(The above story first appeared on LatestLY on Aug 15, 2022 05:30 AM IST. For more news and updates on politics, world, sports, entertainment and lifestyle, log on to our website latestly.com).