Several states, including Maharashtra, Uttar Pradesh, Himachal Pradesh, Telangana, among others will be observing holiday on account of Muharram 2021 on August 20. 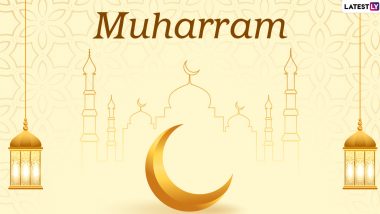 New Delhi, August 18: Muharram marks the beginning of Islamic New Year. It is the first month of Hijri calendar which is the Islamic calendar. The month is determined following a moon sighting. The Hijri calendar is based on lunar cycle. Accordingly, the new month begins when the moon is sighted on the 29th on the current month. However, if the moon is not visible on 29th day as well, the current month completes 30 days and the new month commences on the very next day.

All states in India observe a holiday on Muharram. This year as well, subject to the sighting of the crescent moon, state government have declared holiday for the same. However, some states have notified a holiday on August 19 while others on August 20 to mark the holy occasion of Muharram, the first month of Hijri calendar that commences Islamic New Year.  Is Muharram Celebrated as Festival? Why Do Muslims Self-Flagellate on Ashura? When Will Muharram Chand Appear? All FAQs Answered.

According to official notification, the holiday on account of Muharram in Delhi has been shifted to August 20. Earlier, the holiday was notified for August 19 in the national capital. However it was recently changed to August 20, Friday. In Uttar Pradesh as well the August 20 will be observed as a holiday to mark Muharram . Amid the coronavirus outbreak, the Yogi Adityanath government has also issued certain guidelines for the Muharram.

In Maharashtra, August 20 will be marked as the holiday for Muharram. Outlaying the guidelines for the procession, the Bombay High Court said that in addition to compliance of COVID-19 protocols, the procession, scheduled to be held for three hours on August 20, will have to be limited to seven trucks with 15 persons in each vehicle.

Andhra Pradesh on Wednesday changed the Muharram holiday on August 20. Earlier, it was scheduled on August 19. This comes after the shift in holiday date announced by the central government. In Madhya Pradesh also the holiday on account of Muharram 2021 has been shifted from August 19 to August 20.

Similarly in Jharkhand, the holiday on account of Muharram 2021 which was scheduled for August 19 has now been changed to August 20. Himachal Pradesh is also observing the Muharram holiday on August 20. Telangana has also declared August 20 as general holiday for Muharram.

(The above story first appeared on LatestLY on Aug 18, 2021 09:52 PM IST. For more news and updates on politics, world, sports, entertainment and lifestyle, log on to our website latestly.com).