Mumbai Still Not Monsoon Ready? Man Dies After Falling in Open Manhole at Kurla, Locals Complain of Several Other Spots in Area

Manholes have been a problem in several areas and the area near Kurla where this particular incident occurred, has many such manholes. 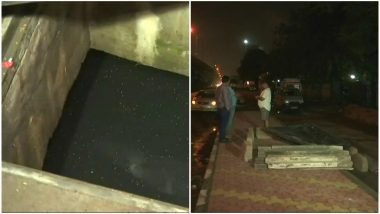 Man has died after falling in Manhole in Kurla (Photo credits: ANI)

Mumbai, June 23: An unidentified man has been reported dead due to falling in an uncovered manhole near Kurla. The manhole on the Eastern Express Highway near a signal at Kurla is uncovered since many days. Locals said they have been complaining about it since a year and no action has been taken as yet. With the monsoons beginning, the problem of potholes and manholes remains persistent, although the Brihanmumbai Municipal Corporation (BMC) informed that they were prepared to deal with the monsoons. Mumbai Monsoon Helplines: BMC is Rain Ready With MCGM App, Toll Free & Whatsapp Numbers to Help Mumbaikars.

Manholes have been a problem in several areas and the area near Kurla where this particular incident occurred, has many such manholes. About the preparation for the monsoons, the BMC had told the High Court it is prepared to tackle all calamities. Counsel Anil Sakhre told a bench of Justices Ranjit More and Anuja Prabhudessai that it had put in place various safety measures, including mapping flood-prone and low-lying areas, installing water suction pumps in such areas, and most importantly, installing special safety grilles on manholes across all flood-prone areas in the city. The BMC also has a helpline to complain about potholes in the city.

Last year in August 2017, Dr Deepak Amarapurkar, a renowned gastroenterologist from the city also died after falling in an open manhole, following the heavy downpour. Post the incident, there was again a lot of questioning about the corporation's inefficiency. With one life claimed by the open manhole already, it is high the BMC authorities take action and cover all the manholes around the city, as it stated to the HC.

(The above story first appeared on LatestLY on Jun 23, 2018 08:56 AM IST. For more news and updates on politics, world, sports, entertainment and lifestyle, log on to our website latestly.com).