The bail application of Bineesh Kodiyeri - younger son of former CPI-M Kerala state secretary and politburo member Kodiyeri Balakrishnan, could not be taken up on Wednesday in the Karnataka High Court. It has been posted for the next week. 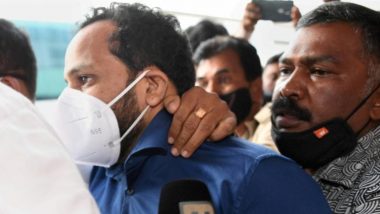 Bengaluru/Thiruvananthapuram, June 9: The bail application of Bineesh Kodiyeri - younger son of former CPI-M Kerala state secretary and politburo member Kodiyeri Balakrishnan, could not be taken up on Wednesday in the Karnataka High Court. It has been posted for the next week.

This is the eighth time that the bail application had come up. Bineesh Kodiyeri, Son of CPM State Secretary, Sent to Judicial Custody for 14 Days in Drug Case

Bineesh was arrested by the Bengaluru division of the Enforcement Directorate (ED) under the Prevention of Money Laundering Act (PMLA), and since October 29 last year, he has been cooling his heels at a jail in Bengaluru.

The counsel for Bineesh has been trying to get an interim bail, for a while as he claims is 'unwell' and wishes to be near his father.

On Wednesday when the bail application came up, the counsel for the ED informed that their senior counsel is recovering after COVID-19 and is expected to return shortly and they agreed to take it up next week.

Bineesh's close aide Anoop Mohammed was first picked up by the Narcotics Control Bureau (NCB) and has been jailed in Bengaluru and it was after his arrest, Bineesh was questioned and later arrested.

Kodiyeri Balakrishnan recently had gone on record stating that his son is jailed due to political vendetta as in cases registered under PMLA, bail is generally given, but in his son's case it has not happened.

Incidentally in the political circles, the speculation was rife that this time he might get bail because the Kerala unit of the BJP is caught in an allegation of having received a huge sum of money through hawala and was used for the April 6 assembly polls.

The Congress party has been speculating that there could be a possible trade off between the case of Bineesh and the leaders presently entangled in the hawala transfer of money.

(The above story first appeared on LatestLY on Jun 09, 2021 01:33 PM IST. For more news and updates on politics, world, sports, entertainment and lifestyle, log on to our website latestly.com).