A special court has sent Bineesh Kodiyeri to judicial custody for 14 days. His custody was extended to November 11 on November 8. The court will hear the bail application on November 18. The Enforcement Directorate (ED) has a week's time to file a reply. 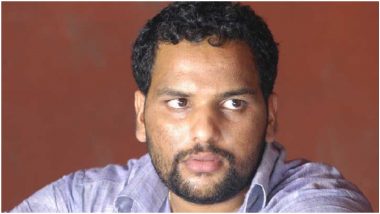 A special court has sent Bineesh Kodiyeri to judicial custody for 14 days. His custody was extended to November 11 on November 8. The court will hear the bail application on November 18. The Enforcement Directorate (ED) has a week's time to file a reply. Malayalam artist Bineesh Kodiyeri is the son of Kerala CPI(M) state secretary Kodiyeri Balakrishnan. He was arrested by the Enforcement Directorate in a money laundering case linked to peddling drugs in Bengaluru. Bineesh Kodiyeri, Son of CPM State Secretary Is Under ED Custody in Bengaluru; BJP Demands Probe into His Links With KCA and Malayalam Film Industry.

On November 5, ED conducted a raid at his house, which went on for two days as per reports. Bineesh's family had filed a complaint with the Kerala State Commission for Protection of Child Rights (KeSCPCR) alleging that the kid of the family was locked in a room for 24 hours with no food. KeSCPCR did not go ahead with the complaint.

BJP state president K Surendran accused the commission of acting like a feeder organisation of the CPM. "We demand a thorough probe into various deals in the KCA since the kingpin in all such activities is Bineesh. His role has to be put under the scanner, as quite a few illegal deals in the KCA have surfaced by now. A probe into the KCA functioning by a national agency ought to be done," Surendran said. Surendran also added that Bineesh's role in the Malayalam movie industry also has to be investigated.

Bineesh was arrested on October 29 after his name surfaced in the investigation of Mohammed Anoop, who was one of the accused in Bengaluru drugs peddling case. The ED has alleged that Bineesh transferred huge amounts of money in Anoop's account. The agency has also alleged that Anoop's credit card was found at Bineehs' residence. It is also accused that Anoop operated out of a hotel owned by Bineesh.

(The above story first appeared on LatestLY on Nov 11, 2020 06:31 PM IST. For more news and updates on politics, world, sports, entertainment and lifestyle, log on to our website latestly.com).