The National Voters’ Day has been celebrated on January 25 every year since 2011, all across the country to mark the foundation day of Election Commission of India, i.e. January 25, 1950. The main purpose of the NVD celebration is to encourage, facilitate and maximize enrolment, especially for the new voters. 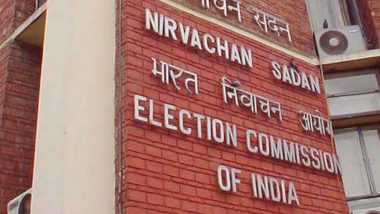 New Delhi, January 24: The Election Commission of India (ECI) will celebrate its 11th National Voters Day (NVD) on January 25, 2021. President Ram Nath Kovind will be the Chief Guest at the national function being organized in New Delhi by the Election Commission of India. The event will be held at the Ashok Hotel, New Delhi and the Honourable President shall grace the occasion virtually from Rashtrapati Bhawan. Union Minister for Law and Justice, Communications and Electronics and Information Technology Ravi Shankar Prasad will grace the function as the Guest of Honour.

The theme for this year’s National Voters Day (NVD), ‘Making Our Voters Empowered, Vigilant, Safe and Informed’, envisages active and participative voters during elections. It also focuses on ECI’s commitment towards conducting elections safely during the COVID-19 pandemic.

The National Voters’ Day has been celebrated on January 25 every year since 2011, all across the country to mark the foundation day of Election Commission of India, i.e. January 25, 1950. The main purpose of the NVD celebration is to encourage, facilitate and maximize enrolment, especially for the new voters. Dedicated to the voters of the country, the day is utilized to spread awareness among voters and for promoting informed participation in the electoral process. New voters are felicitated and handed over their Elector Photo Identity Card (EPIC) in the NVD functions.

During the event, the President of India will confer the National Awards for the year 2020-21 and launch ECI’s Web Radio: ‘Hello Voters’. The National Awards for the Best Electoral Practices will be conferred on State and District level officers for their outstanding performance in the conduct of elections in different spheres such as IT initiatives, Security Management, Election Management during COVID-19, Accessible Election and contribution in the field of voter awareness and outreach. National Awards will also be given to important stakeholders like national icons, CSOs and media groups for their valuable contribution towards voters’ awareness.

ECI’s Web Radio: ‘Hello Voters’: This online digital radio service will stream voter awareness programmes. It will be accessible through a link on the Election Commission of India website. The programming style of Radio Hello Voters has been envisaged to match that of popular FM radio services. It will provide information and education on electoral processes through songs, drama, discussions, spots, stories of elections etc. in Hindi, English and regional languages from all over the country.

e-EPIC programme to be launched

Union Minister Ravi Shankar Prasad will launch the e-EPIC programme and distribute e-EPICs and Elector Photo Identity Cards to five new voters.  e-EPIC, a digital version of the Elector Photo Identity Card can be accessed through the Voter Helpline App and websites https://voterportal.eci.gov.in/   and   https://www.nvsp.in/.  Prasad will also release three publications of the Election Commission during the event. Copies of these documents will be presented to the Honourable President of India. Details of the publications are given below:

Conducting Election During Pandemic- A Photo Journey: This photo book encapsulates the challenging journey of conducting elections amidst a pandemic.  The Commission successfully conducted several elections in the country, beginning with the Biennial Election to the Rajya Sabha. This was followed by Legislative Assembly Elections in Bihar, one of the biggest such exercises throughout the world during the pandemic.

Bye-Elections were also conducted for 60 constituencies in various states of the country. SVEEP Endeavours: Awareness initiatives during Lok Sabha Election, 2019: This book provides a detailed insight into voter awareness interventions, innovations and initiatives during the 17th General Election, conducted in 2019.  It documents the spirit of ‘Desh Ka Mahatyohar’, the biggest festival of democracy celebrated across the nation cutting through the barriers of gender, caste, creed and religion. Chalo Karen Matdaan: It is a comic book which aims at voter education in a fun and thought-provoking way. Targeting young, new and future voters, this comic contains interesting and relatable characters to educate voters at large on electoral processes.

(The above story first appeared on LatestLY on Jan 24, 2021 11:30 AM IST. For more news and updates on politics, world, sports, entertainment and lifestyle, log on to our website latestly.com).