The downpour caused severe hardships to pilgrims as the landslides forced the authorities to close roads leading to Sri Venkateswara temple atop Tirumala. There was no electricity supply in the town since 3 p.m. after rain water entered a sub-station. 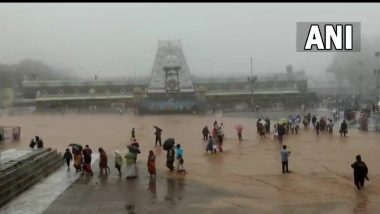 The downpour caused severe hardships to pilgrims as the landslides forced the authorities to close roads leading to Sri Venkateswara temple atop Tirumala. There was no electricity supply in the town since 3 p.m. after rain water entered a sub-station.

Roads in several key areas of the town turned into cesspools due to incessant rains under the impact of northeast monsoon, which is active in Chittoor and Nellore district of Andhra Pradesh and adjoining coastal districts of Tamil Nadu. Tamil Nadu Rains: Red Alert Continues in Chennai, Adjoining Districts Amid Heavy Rains.

Alipiri footpath to Tirumala temple was flooded with water gushing down from the hills. Tirumala Tirupati Devasthanam (TTD), which manages the affairs of the famous temple, had already announced closure of Alipiri and Srivarimettlu for two days in view of heavy rains forecast.

Rains also affected the Vaikuntam Queue complex at Tirumala. Water entered into the cellar of the complex. The house of TTD Additional Executive Dharma Reddy's house was also inundated.

Renigunta Airport was also inundated, forcing the authorities to divert the flights. Hyderabad-Tirupati Indigo flight was diverted to Bengaluru. The Hyderabad-Tirupati Air India and SpiceJet flights had to return to Hyderabad. Andhra Pradesh Rains: Heavy Rainfall Leads to Inundation of Roads in Tirupati (View Pics).

Other parts of Chittoor district also received heavy rainfall. Rivulets, streams, reservoirs and lakes were overflowing in the district. Authorities have declared a holiday for all educational institutions in Chittoor district on Friday. Meanwhile, Chief Minister YS Jagan Mohan Reddy has directed the authorities to remain vigilant and take necessary measures in the wake of heavy rains.

During a video-conference with the district collectors of Nellore, Chittoor and Kadapa district on the situation arising from heavy rains, the Chief Minister directed the officials to intensify the relief measures and take appropriate action by monitoring the situation at reservoirs, ponds and water bodies from time to time.

(The above story first appeared on LatestLY on Nov 19, 2021 12:11 AM IST. For more news and updates on politics, world, sports, entertainment and lifestyle, log on to our website latestly.com).