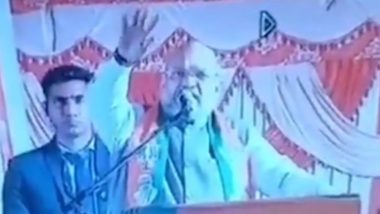 Delhi, January 27: A youth was thrashed by Bharatiya Janata Party (BJP) supporters during Amit Shah's public meeting in Delhi's Babarpur Assembly constituency on Sunday evening. The man was beaten up for chanting anti-Citizenship Amendment Act (CAA) slogans. In the video going viral of the incident, men can be seen attacking the individual using steel chairs in the midst of Shah's speech. Delhi Assembly Elections 2020: Arvind Kejriwal Won Delhi in 2015 by Misleading People, This Time He Will Fail, Says Amit Shah.

So this happened at Babarpur, Delhi when Amit shah was speaking about CAA. Hope the person who got beaten is doing fine. pic.twitter.com/j3K3TI9AsB

Someone at the @AmitShah rally in Delhi's Babarpur raised anti-CAA slogans. He was thrashed and the police had to escort him away. "Usse salaamat le jaiye," Shah said from the stage. Then he asked the crowd to chant "Bharat Mata ki Jai". #DelhiElections2020 pic.twitter.com/ceeK3r22Xp

As the security reached the venue to escort the victim out, Amit Shah told the crowd to raise ‘Bharat Mata ki Jai’ slogans. The youth, a resident of Sangam Vihar area of South Delhi, was handed over to his parents after the verification process, police said. No action was taken against him.

Ahead of Delhi Assembly Elections on February 8, Home Minister is addressing several rallies in Delhi. Earlier, targeting the anti-CAA protests, he said, "press the lotus symbol (on the EVM) so hard that protesters at Shaheen Bagh feel compelled to get up and leave."

The former BJP also targeted Delhi Chief Minister Arvind Kejriwal. “He (Kejriwal) had won the 2015 election by misleading the public. What happened after that? What happened in Varanasi, Punjab, Haryana? They lost and he will fail in Delhi too this time,” Shah said.

(The above story first appeared on LatestLY on Jan 27, 2020 02:18 PM IST. For more news and updates on politics, world, sports, entertainment and lifestyle, log on to our website latestly.com).