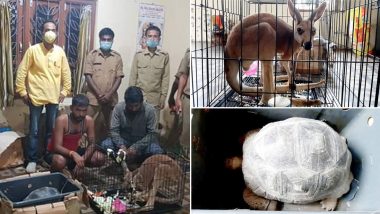 The truck, suspected to be carrying illegal timber, was stopped at Lailapur and during checking, the forest personnel noticed a strong odour emanating from the vehicle, the officials said. On being questioned, the driver said, it was coming from rotten fruits. The forest personnel were not convinced and when they searched the vehicle, the animals and birds were found inside cartons and plastic packets. Two persons, identified as Narsimha Reddy and Navnath Tukaram Daigude, have been detained.

During interrogation, the two persons revealed that the consignment was headed for Guwahati. DFO Cachar forest division Sunnydeo Choudhary has directed forest range officer of Hawaithang Range, Dholai, D Deori to investigate the matter and ensure that the health of the animals is monitored by local veterinarians.