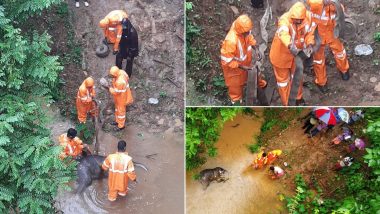 Pathanamthitta, August 7: A baby elephant was found dead in Kerala's Pathanamthitta district on Friday. The dead elephant was found under one of the pillars of Achankovil bridge near Pandalam. Pictures showed officials trying to remove the elephant's body from the spot. The cause of death was not immediately known. The incident occurred amid heavy rains across Kerala, especially in districts like Wayanad, Malappuram and Kozhikode. Horrific Animal Abuse! Pregnant Elephant Dies After Being Fed Pineapple Filled With Firecrackers in Kerala's Palakkad District.

The India Meteorological Department has issued a red alert for Wayanad and Idukki, warning of very heavy rainfall in the coming three days in these districts. The authorities have been on a high alert and have taken the precaution of moving people who live in areas where landslides and landslips are expected and those living on river banks have also been moved to safer places.

Meanwhile, heavy rain followed by a landslide at Rajamalai in Idukki district on Thursday night has left at least 15 persons dead, including a child, and more than 60 others are reported missing. The landslide occurred after heavy rains over the last few days in the area mostly inhabited by tea estate workers.

(The above story first appeared on LatestLY on Aug 07, 2020 07:32 PM IST. For more news and updates on politics, world, sports, entertainment and lifestyle, log on to our website latestly.com).