According to the latest update on the status of avian flu in India, it has been reported that Maharashtra and Madhya Pradesh have completed sanitization activities after successfully finishing the culling operations. Moreover, on January 14, additional cases of avian influenza among crows have been confirmed in Dangs district of Gujarat. 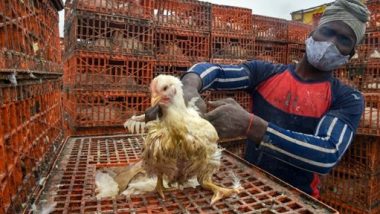 New Delhi, January 15: In India, bird flu (avian influenza) cases have been confirmed in 10 states including Delhi, Maharashtra, Rajasthan among others, while further cases of unnatural mortality of birds have been reported from several regions across the country. According to the latest update on the status of avian flu in India, a government release informed that Maharashtra and Madhya Pradesh have completed sanitisation activities after successfully finishing the culling operations. Moreover, on January 14, additional cases of avian influenza among crows have been confirmed in Dangs district of Gujarat. Bird Flu Transmission: Scientists Confirm Current H1 Strain is Transmissible From Birds to Humans, But Risk is Currently Low.

The ten states that have been affected by bird flu include Delhi, Maharashtra, Uttar Pradesh, Kerala, Gujarat, Haryana, Rajasthan, Madhya Pradesh, Himachal Pradesh and Uttarakhand. In Maharashtra, cases of bird flu are spreading in Maharashtra with 382 bird deaths reported from nine districts on Thursday, taking the toll to 3,378 across the state. According to the state department, samples of birds from four more districts in the state Latur, Nanded, Nashik and Ahmednagar returned positive for bird flu. Bird Flu FAQs: Is it Safe to Eat Eggs & Chicken? Do Humans Get Infected With Avian Influenza? Here Are Answers to Your Doubts.

In Haryana, samples from four poultry farms have been confirmed to be positive for avian influenza (H5N8). The farms include Maharaja poultry farm in Khatauli; Tara poultry farm, Batour and Singla poultry farm in Mauli village of Panchkula district of Haryana. In the wake of the rising bird flu cases, the central teams formed for monitoring the situation in the affected areas of the country are visiting the affected sites and conducting epistemological studies. Moreover, the Department requested Ministry of Civil Aviation GOI to allow uninterrupted transportation of samples for expeditious testing of Avian Influenza in designated laboratories.

(The above story first appeared on LatestLY on Jan 15, 2021 11:04 AM IST. For more news and updates on politics, world, sports, entertainment and lifestyle, log on to our website latestly.com).