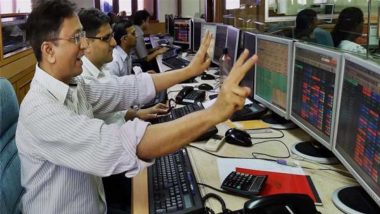 Mumbai, April 20: Shares of Bombay Oxygen Investments surged around 133 percent in less than a month as investors mistakenly assumed the company to be producer of oxygen amid the rising demand during the COVID-19 pandemic era. Share of Bombay Oxygen Investments skyrocketed as the company has the word "oxygen" in its name. On Monday, shares of the non-bank financial company (NBFC) increased to Rs 24,575 at a piece at the Bombay Stock Exchange (BSE). What's in a Name? A Lot for Stock Market, if It's 'Oxygen' in COVID-era!.

On Tuesday, the stock price of Bombay Oxygen Investments dipped by five percent to Rs 23,346. Bombay Oxygen Investments Ltd shares have been witnessing a particularly sharp rally for many days now and have more than doubled from about Rs 10,000 level seen in March-end, and the market watchers feel the only reason for this kind of stupendous rally is the name of the company. Elon Musk Tweets 'Use Signal'; Followers Get a Wrong 'Signal', Subscribe To Unrelated Company's Stock with Similar Name, Giving It 1,100% Surge.

Bombay Oxygen stock price has doubled, ppl are buying assuming the company supplies O2. However, the company is no longer in the business of industrial gas. It's an NBFC considering its source of revenue is from investments. Please watch where you invest your hard-earned money! pic.twitter.com/BO7K4qGzvz

Yesterday, the stock price of Bombay Oxygen Investments yesterday went so high that it hit a circuit breaker at Rs 24,575.

Only, Bombay Oxygen has nothing to do with oxygen production, it is a Non Banking Financial Institution that deals in stocks and shares.

On the homepage of its website, the company says it was incorporated as 'Bombay Oxygen Corporation Limited' on October 3, 1960, but it changed its name to 'Bombay Investments Limited' with effect from October 3, 2018. It further said the company's "primary business was manufacturing and supplying of industrial gases which has been discontinued from August 1, 2019."

It "owns substantial financial investments in the form of shares, mutual funds and other financial securities and the income from such financial  investments is the source of revenue of the company." It has been issued a certificate of registration from the RBI "for carrying on the business of Non-Banking Financial Institution (NBFC) without accepting Public Deposits."

While several market watchers said the company no more deal in oxygen, there is a contradiction on its website, as its 'products' section continues to refer to oxygen and other industrial gases. This section still describes the company as 'Manufacturer and Dealer of Industrial Gases' and lists oxygen, nitrogen, argon, carbon dioxide as products. However, the BSE page of the Mumbai-based company describes it as an NBFC.

(The above story first appeared on LatestLY on Apr 20, 2021 05:40 PM IST. For more news and updates on politics, world, sports, entertainment and lifestyle, log on to our website latestly.com).