On the occasion of World Tourism Day on September 28, Cox & Kings Foundation in association with Anuprayaas has Braille embossed railings on foot over bridges. 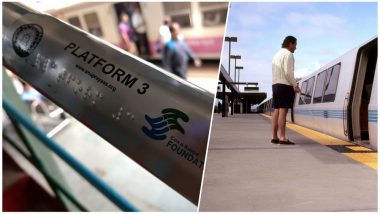 Mumbai, September 29: Regular railway commuters have to face problems with trains being delayed or coming on different platforms, and also the increasing crowd. For the visually challenged commuters, it is an even bigger problem to catch the train and reach their destination. But Borivali station in Mumbai has become the first railway station to install braille-friendly platform indicators. On the occasion of World Tourism Day on September 28, Cox & Kings Foundation in association with Anuprayaas has Braille embossed railings on foot over bridges. CBSE Introduces Sign Language ‘Braille’ As a Subject for Differently Abled Children.

The inauguration ceremony was held at Borivali station by Gopal Shetty, Member of Parliament from Mumbai North. Anuprayaas is an organisation which has been working for developing blind friendly stations in India. Along with indicators, there will also be braille script embossed railings in the subway along with Braille booklets, which will help them even more. Mumbai Locals Shame: Commuters Spit Gutka on Women Waiting For Train at Borivali Station; Police Complaint Filed.

Karan Anand, the head of relationships, Cox & Kings was quoted, "In order to make travel barrier-free and address the accessibility concerns of people with disabilities, it is integral for the government, businesses and the people to work hand in hand. An inclusive society can only be created by enabling a physical environment that can be accessed seamlessly and equally by all. This project is a step towards creating a travel environment that is easy, dignified and seamless." There was a survey carried out to find about the difficulties faced by visually impaired passengers. One of the major problems they face is to figure out which platforms the train is coming on.

The booklets will help in guiding them with the various amenities at the station. They will also have emergency numbers so it will definitely ease out their problems and also reduce the need to communicate with the strangers, rather rely on them. Borivali station was selected as it also connects the outstation passenger trains. In India, Mysore is the first blind friendly station.

(The above story first appeared on LatestLY on Sep 29, 2018 10:51 AM IST. For more news and updates on politics, world, sports, entertainment and lifestyle, log on to our website latestly.com).