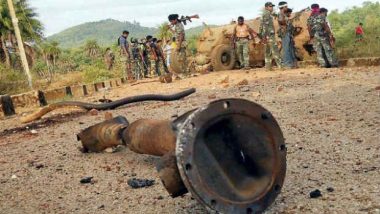 Sukma, November 29: A Central Reserve Police Force (CRPF) officer was killed in an improvised explosive device (IED) blast in Chhattisgarh's Sukma district on Saturday night. According to news agency ANI, 10 other CRPF personnel were injured in the blast triggered by Naxals. Eight injured personnel were airlifted to Raipur, while the remaining two injured soldiers are undergoing treatment at CRPF hospital at Chintalnar.

The attack took place at around 8.30 pm on Saturday at Chintalnar forest area. All the personnel belonged to the 206th battalion of the Commando Battalions for Resolute Action (CoBRA). A joint team of CoBRA and local police were out in the area for a special operation when the explosion took place. Chhattisgarh: Naxal Attack in Sukma, CRPF Personnel Killed, 7 Injured.

Total 10 personnel were injured & one died in an IED blast in Sukma, Chhattisgarh last night.

8 injured personnel were heli lifted to Raipur in the midnight for further treatment. Two injured are being treated at CRPF Hospital, Chintalnar: CRPF

The officer martyred in the attack has been identified as Nitin Bhalerao he succumbed to his injuries at 3:30 am on November 29. Bhaleroa belonged to Maharashtra. Notably, Sukma district is a part of the "Red corridor", the region primarily affected by the Naxalite insurgency.

(The above story first appeared on LatestLY on Nov 29, 2020 09:24 AM IST. For more news and updates on politics, world, sports, entertainment and lifestyle, log on to our website latestly.com).