FICCI in a recent report stated that the production of several commonly used medicines like paracetamol, ibuprofen and other medicines would get severely impacted if the supply disruption caused by the coronavirus outbreak continues for another two months. 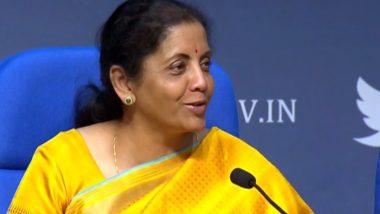 New Delhi, February 19: The coronavirus has claimed more than 2,000 lives in China and fear and panic has gripped people across the world. According to an Economic Times report, FM Nirmala Sitharaman allayed fears of any price rise in the short term due to supply disruption from China due to the outbreak on Tuesday. The FM met industry and trade bodies to assess the impact of the virus on Indian business.

She further assured that there was no shortage of raw materials with the industries as of now. Sitharaman assured that the industry would speak to the PMO on steps to provide relief to sectors struggling. According to another report, prices of televisions, air-conditioners, refrigerators and some smartphone models are set to increase later this month as manufacturers struggle to deal with the shortage of components due to China shut down. COVID-19 OutBreak: Paracetamol Price in India Increases by 40%, Azithromycin Rate Jumps 70% Due to China Closure.

Sectors that directly depend on Chinese imports, like pharmaceutical, smartphones, auto parts, toys and others,  have started to face the heat in India. According to a Bloomberg report, prices of paracetamol have jumped 40 percent in India, while the prices of azithromycin, an antibiotic used for treating a variety of infection have shot up by 70 percent. The companies had informed earlier that if the situation didn't improve in the next two months, there could be a further shortage.

FICCI in a recent report stated that the production of several commonly used medicines like paracetamol, ibuprofen and other medicines would get severely impacted if the supply disruption caused by the coronavirus outbreak continues for the next two months.

(The above story first appeared on LatestLY on Feb 19, 2020 10:50 AM IST. For more news and updates on politics, world, sports, entertainment and lifestyle, log on to our website latestly.com).