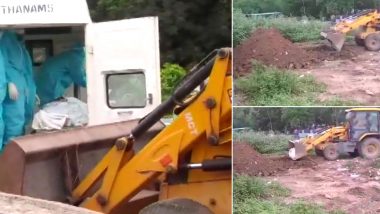 Tirupati, July 6: Authorities in Andhra Pradesh's Tirupati buried the dead body of a person who had died of coronavirus (COVID-19) using a proclainer. Following the incident, which took place on July 5, Tirupati Municipal Commissioner PS Grisha said proclainer was used as the deceased had weighed over 175 kilograms and the victim's family's permission had been sought. Andhra Pradesh Crosses Million-Mark in COVID-19 Testing.

"The body weighed over 175kg, so the proclainer was used with family's consent. But such an incident won't be repeated," Municipal Commissioner Grisha told news agency ANI. This is second such incident in Andhra Pradesh. Earlier, an excavator was used to dispose of the body of a 70-year-old person, who had died of COVID-19 in Srikakulam district. The incident took place in Udayapuram area in Palasa town. DK Shivakumar Shares Video Showing Dead Bodies of COVID-19 Patients Being Thrown in Pit in Ballari, Administration Apologises.

Andhra Pradesh: Body of a #COVID19 positive person was laid to rest in a pit using a proclainer in Tirupati yesterday. Tirupati Municipal Commissioner says, "The body weighed over 175kg, so the proclainer was used with family's consent. But such an incident won't be repeated." pic.twitter.com/l8z9tRn9hU

According to reports, no kin had come forward to cremate the body after the elderly man died of COVID-19. Later, municipal workers, wearing PPE kits, put the body on the front portion of proclainer and drove to the cremation ground. After a video of the incident went viral, Collector J Nivas suspended municipal commissioner T Nagendra Kumar and sanitary inspector N Rajeev.

(The above story first appeared on LatestLY on Jul 06, 2020 08:34 PM IST. For more news and updates on politics, world, sports, entertainment and lifestyle, log on to our website latestly.com).