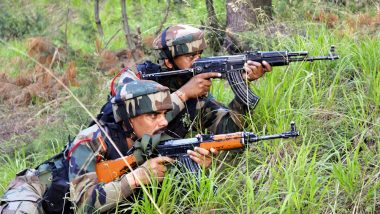 Srinagar, November 19: The Indian Army on Thursday refuted reports of the force carrying out an action on terror launchpads in Pakistan-occupied Kashmir (PoK) across the Line of Control (LoC) today. Indian Army Director General of Military Operations Lt Gen Paramjit Singh called these media reports fake. According to the Army, no such operation was carried out on November 19.  Indian Army Carrying Out ‘Pinpoint Strikes’ on Terror Launchpads Inside Pakistan Occupied Kashmir: Govt Sources.

Earlier in the day, reports surfaced that Indian Army was carrying out "pinpoint strikes" on suspected terror launchpads inside PoKin response to Pakistani military's unrelenting efforts to push a maximum number of terrorists into India before the onset of winters. Notably, in the past few weeks, ceasefire violations have increased from the Pakistani side. Surgical Strikes After Uri Terror Attack: Remembering Heroes of Indian Army's Daring Cross-Border Mission That Stunned Pakistan.

According to sources in security establishment, Pakistan Army has been aggressively targeting civilians on Indian side of the LoC by resorting to indiscriminate firing by heavy calibre artillery guns to support infiltration of terrorists into J&K. Pakistani hostilities increased after India announced its decision to withdraw the special status of Jammu and Kashmir and divide the state into two union territories in August last year.

(The above story first appeared on LatestLY on Nov 19, 2020 08:35 PM IST. For more news and updates on politics, world, sports, entertainment and lifestyle, log on to our website latestly.com).