While the farmers were yet to reach Delhi today, their march was not called off. The agrarian bodies are hopeful of making it to the national capital in the next 24-48 hours. The Bharatiya Kisan Union (BKU), which is one of the protesting bodies, said upto two lakh farmers could converge in Delhi and hold an indefinite stir. 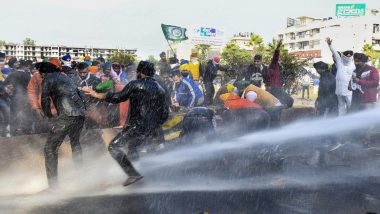 New Delhi, November 26: Farmer organisations based in Punjab, Haryana, Uttar Pradesh and Rajasthan launched a massive protest march towards the national capital on Thursday to press for the revocation of farm reform laws. After being briefly stopped at the Punjab-Haryana border, the demonstrators succeeded in entering the state, and were only a few kilometres away from Delhi. Across NCR, security has been beefed up to prevent their entry. Here are the 10 major updates on the farmers' march.

- The protest march began in the early hours of today, and was primarily led by the agrarian bodies centred in Punjab. At 10:30 am, they succeeded in throwing away the barricades installed by Haryana police in Ambala to prevent their entry into the state. Farmers Protest: Punjab Farmer Unions Change Strategy, to March to Delhi Via Other Routes.

- The farmers braved tear gas shells, water cannons from the Haryana Police before entering into the state. The protesters have divided themselves into splinter groups, using an array of routes, to slip past the security placed at all nodes of the state to halt their march towards Delhi.

- The crackdown on activists involved in the protest continued, as the Haryana Police detained Swaraj India president Yogendra Yadav and around 50 farmers who were headed towards Delhi from Gurugram. "They are accusing me of disrupting peace and violating Covid safety rules. Were there no such rules in Bihar polls?" he asked reporters before being taken into detention by the police.

- While the farmers were yet to reach Delhi today, their march was not called off. The agrarian bodies are hopeful of making it to the national capital in the next 24-48 hours.

- The Bharatiya Kisan Union (BKU), which is one of the protesting bodies, said upto two lakh farmers could converge into the national capital and hold an indefinite stir till the "black farm laws" are repealed.

-  "Almost 600 to 700 tractor trolleys are ready to march to Delhi for protest against new farm laws. We have sufficient food material with us for six months. Each tractor-trolley is carrying around 22 people,"  Harmeet Singh Kadian, a member of the Bhartiya Kisan Union, was reported as saying.

- After the farmers hinted that they would be using several routes and be divided into splinter groups to reach the capital, the Delhi Metro announced a major regulation in its services. The commutation facility from NCR stations to Delhi would not be available till further notice.

- "As advised by Delhi Police, Metro services will be available only from Delhi towards the NCR sections tomorrow. However, services from the NCR stations towards Delhi will not be available due to security reasons till further notice,"  the Delhi Metro Rail Corporation said.

- Across the arterial roads in Delhi-NCR, traffic snarls were witnessed. Security deployments on the ground has been escalated. The police is leaving no stone unturned to prevent a sit-in stir by the farmers.

- The politicians of Punjab lashed out at the Centre for restricting the farmers' right to protest. "Today is Punjab’s 26/11. We are witnessing end of right to democratic protest. Akali Dal condemns Haryana government and Centre for choosing to repress peaceful farmer movement. Battle for Punjab farmers' rights can't be throttled by using water cannons against them," Shiromani Akali Dal president Sukhbir Singh Badal said.

The three farm laws, which allow the farmers to sell outside the Agricultural Produce Market Committees (APMCs) and are intended to break the "clutch of middlemen" over the procurement process, were passed by the Parliament in September-end. The agrarian bodies are since up in protest as the legislations are considered by them as a "ploy to dismantle the MSP (Minimum Support Prices) regime".

(The above story first appeared on LatestLY on Nov 26, 2020 06:53 PM IST. For more news and updates on politics, world, sports, entertainment and lifestyle, log on to our website latestly.com).