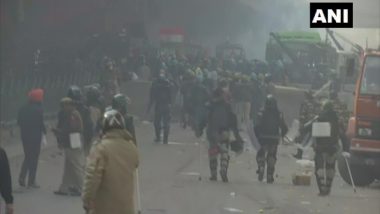 New Delhi, January 26: The government on Tuesday ordered shut down of internet services in parts of Delhi NCR amid protests by farmers in the national capital. A government order sent to telecom service providers directed temporary suspension of internet services in areas of Singhu, Ghazipur, Tikri, Mukarba Chowk and Nangloi and their adjoining areas in the NCT of Delhi from 12.00 hours to 23.59 hours on the Republic Day, according to the Department of Telecom.

According to a Department of Telecom spokesperson, internet shutdown order has been invoked by the local law and order administration and not by the department. Farmers' Tractor Rally on January 26 Updates: Internet Services Suspended in Border Areas of Delhi After Ongoing Agitation Turns Violent; Here's What We Know So Far.