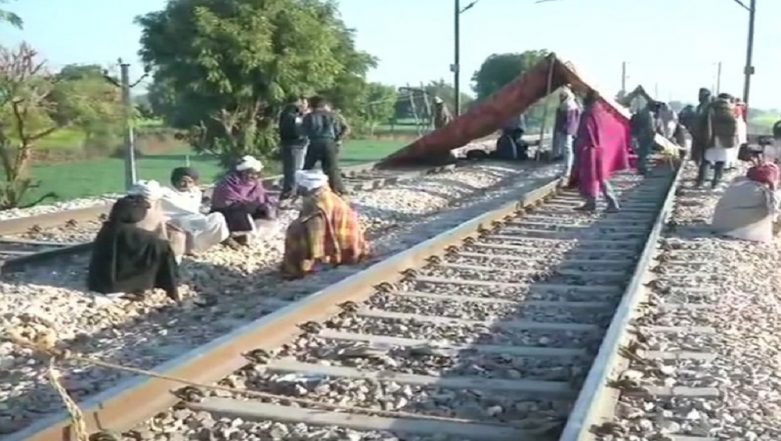 Jaipur, February 9: Due to the ongoing protest by the Gujjar community in Rajasthan’s Sawai Madhopur over the issue of reservation, five trains have been cancelled, while 15 others were diverted in Kota Division of Western Central on Saturday. The cancelled trains are 12059/12060 Kota - Nizamuddin - Kota Janshatabdi Express, 19803 Kota - Katra express and 19804 Katra - Kota Express train. The blocked railway line in the West Central Railway connects Delhi to Mumbai. However, the Delhi-Jaipur-Agra line remains clear. Rajasthan Govt Issues Circular Mandating 1% Reservation For Gujjars, Four Other Communities Under MBC Category.

Yesterday, Gujjar leader Kirori Singh Bainsla and his supporters staged a sit-in on the rail tracks. The protesters are demanding five per cent reservation to Gujjars, Raika-Rebari, Gadia Luhar, Banjara and Gadaria communities in government jobs and educational institutions. As the dharna continued at Malarna Doongar -- around 125 km southeast of Jaipur, Rajasthan Chief Minister Ashok Gehlot appealed to the people to maintain peace.

Currently, the five communities are getting one-percent separate reservation under the most-backward category in addition to the Other Backward Class (OBC) quota. Bainsla had last month gave a 20-day ultimatum to the state government to clear its stand on over the reservation demand, failing which he threatened of reviving the quota agitation. As the deadline lapsed on Friday, Bainsla held a 'maha panchayat' at Malarna Doongar and started the sit-in.