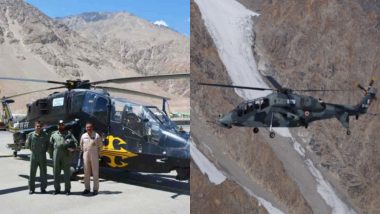 Ladakh, August 12: The Hindustan Aeronautics Limited (HAL) on Wednesday announced that its two Light Combat Helicopters (LCH) have been deployed for operations at high altitude in Leh. These two helicopters will support the Indian Air Force in the Ladakh sector at short notice amid the border tensions with China along the Line of Actual Control (LAC).

Issuing a statement, HAL chairman R Madhavan said, "It is the lightest attack helicopter in the world designed and developed by HAL to meet the specific and unique requirements of Indian armed forces reflecting the crucial role of HAL in Atma Nirbhar Bharat." The recent deployment of the LCH supports India's aim to ban the import of 101 different types of weapons, systems and ammunition over the next five years. Border Tensions With China: ‘Be Prepared for Any Eventuality’, Says Army Chief General Manoj Mukund Naravane to Field Commanders.

Before the deployment of LCHs Vice Chief of Air Staff -- Air Marshal Harjit Singh Arora -- participated in one such operation along with HAL test pilot Wing Commander (Retd) Subash P John. The HAL-developed LCH had successfully demonstrated its quick deployment prowess in extreme temperatures and also landed at one of the most treacherous helipads in the Ladakh region.

Among the special feature of LCH includes state-of-the-art systems, highly accurate weapons, ability to carry adequate weapon load at high altitudes under varied conditions, most suitable for hot and high altitude operations and ability to operate in the complete 'Area of Responsibility' (AOR).

As per details Indian Air Force and Indian Army combinedly need around 160 Light Combat Helicopters. However, the Defence Acquisition Council (DAC) had approved the proposal for only 15 LCH in the initial batch, which includes 10 for IAF and 5 for Army. Meanwhile, HAL had submitted its response.

(The above story first appeared on LatestLY on Aug 12, 2020 03:42 PM IST. For more news and updates on politics, world, sports, entertainment and lifestyle, log on to our website latestly.com).