High Tide Timing in Mumbai For Today: Wave Measuring 3.65 Metres Expected at 6:58 PM on July 19 Amid Heavy Rainfall In The City 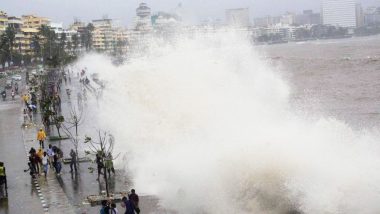 Mumbai, July 19: Mumbai will witness a high tide of 3.65 metres on Monday at 6:58 pm. It will be the second high tide of the day. The first high tide of 3.6 metres occurred at 7:29 pm. Meanwhile, the maximum city will witness a low tide of 2.07 metres at 1:15 pm. During the monsoon season, the high tide and low tide timings are keenly observed in Mumbai due to the location of the city. It is located at the coastal edge facing the Arabian Sea. Mumbai Rains: Local Train Services Between CSMT And Thane Restored After Being Suspended For 15-20 Minutes Due to Waterlogging on Tracks.

Meanwhile, Heavy and incessant rains battered Mumbai in the past 24 hours as the fifth thunderstorm hit the city within a month. At least 33 people are reported to have lost their lives in rain-related incidents in the city. The India Meteorological Department has issued a red alert in Mumbai for Monday. The city received around 200 mm of rain in the early morning hours. Here You Can Check High Tide Times For July:

Severe waterlogging and long traffic jams were also reported in many parts of the city. Local train services were also disrupted due to heavy showers. On the Central line, local trains are running behind schedule due to waterlogging on tracks. Many parts of the city and adjoining areas reported power cuts. Inter-state trains are also being delayed because of incessant showers. Mumbai Rains: Heavy Rainfall Wreaks Havoc in the City.

The rains claimed 33 lives in Mumbai. Nineteen people died as a compound wall came crashing down on some houses located on a hillock after a landslide in the Chembur area. The retaining wall of the Bharatnagar locality collapsed at 1 am on Sunday. Meanwhile, 10 people were also injured in the incident. In another incident, seven hutment dwellers died as six shanties collapsed after a landslide in Mumbai's Vikhroli suburb at 2.30 am. Two people are undergoing treatment at a hospital. Two people were also reported to have lost their lives in Andheri and Kandivali areas.

On Sunday, Maharashtra Chief Minister chaired a high-level meeting. He took stock of the situation as the IMD forecast heavy rainfall in the city. Thackeray directed the agencies to remain more alert and asked authorities to keep a watch on landslide-prone areas and dilapidated buildings.

(The above story first appeared on LatestLY on Jul 19, 2021 11:31 AM IST. For more news and updates on politics, world, sports, entertainment and lifestyle, log on to our website latestly.com).