India Can Be Lower Cost Producer Than China If Industry and Government Work Together, Says Maruti Suzuki Chairman RC Bhargava

Bhargava presented his ideas on making Indian manufacturing globally competitive at an online dialogue with the country's management leaders organised by All India Management Association (AIMA). 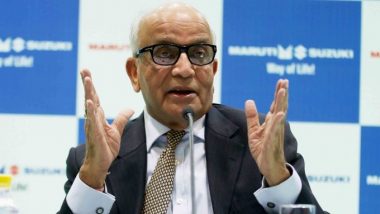 New Delhi, November 26: India has the capability to become a lower cost producer than China if the industry and the government work together, Maruti Suzuki India Chairman R.C. Bhargava said on Thursday.

Bhargava presented his ideas on making Indian manufacturing globally competitive at an online dialogue with the country's management leaders organised by All India Management Association (AIMA).

Bhargava argued that the only objective of government policies has to be to increase the competitiveness of Indian industry so that it can make things at the lowest cost and the best quality in the world. "The more the industry can sell, the more jobs will be created in the economy," he said. Maruti Suzuki India Partners with HDFC Bank to Offer Flexible Finance Schemes for New Car Buyers.

He pointed out that Maruti Suzuki produces more cars each year without adding to its workforce, but the increased sales of cars each year create more jobs in the service economy. Bhargava said that there is fault in the policy thinking that focuses on job creation by each sector instead of job creation in the total economy.

With regard to states reserving jobs in manufacturing for locals, Bhargava said that it is an anti-competitive step. The LeaderSpeak session, which was 33rd in the series, was moderated by Harsh Pati Singhania, President, AIMA and Vice Chairman and Managing Director, JK Paper Ltd, while Rekha Sethi, Director General, AIMA, anchored the session.

The protection for the MSME sector has been the bane of Indian manufacturing, according to Bhargava. He argued that the MSMEs have to be as globally competitive as the large companies because the supply chain determines overall competitiveness. He said that the government should understand that the small-scale businesses in manufacturing and the services are different animals and must be treated differently by the policymakers.

Indian industry cannot be competitive unless the promoters and managers treat workers as partners, argued Bhargava. He pointed out that Maruti owes its success to explaining to its workers that they will prosper if the company grows and backing that with policies and actions that delivered income and career growth to the employees. He said that Indian workers had been protected and pampered by the government and the courts before 1991 and the managements themselves had made no attempt to educate workers about what they would gain if the company grew.

Indian industry struggles with high cost and low efficiency in every area because of the nature of politics in the country, according to Bhargava. He said that not only the logistics, but India's competitiveness is lower through entire infrastructure because of government control. The cost of finance is also high in India because of government ownership of banks, which results in high lending rates and loss of competitiveness of Indian industry, he added. Maruti Suzuki's Manesar Plant Employee Tests Positive for COVID-19.

The lack of trust between the people and the industry is a major constraint on policymaking, he said, adding that that when people see promoters and their families using companies for their own benefit instead of benefit of all stakeholders, they suspect politicians who support the private sector.

However, he expressed satisfaction with the government for supporting private industry and talking about building trust. "Big industrialists have to win trust. The government cannot do it for them," he said.

(The above story first appeared on LatestLY on Nov 26, 2020 07:30 PM IST. For more news and updates on politics, world, sports, entertainment and lifestyle, log on to our website latestly.com).