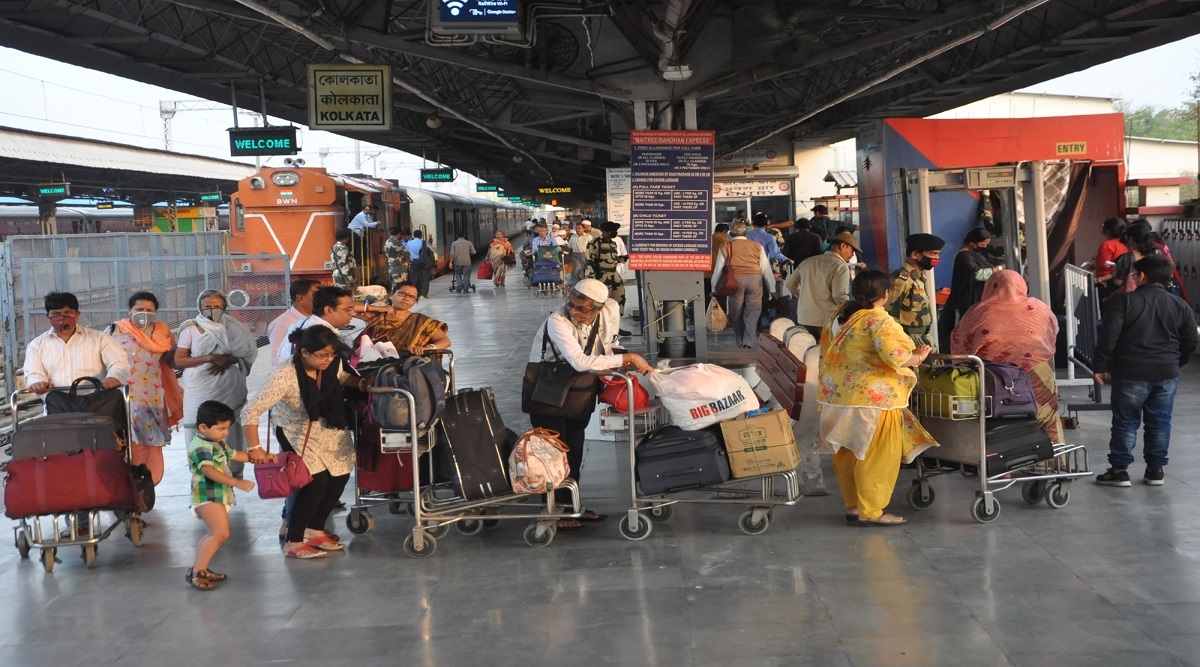 New Delhi, March 23: Following the suspension of train services across the country till March 31 amid the growing coronavirus scare, hundreds of travelling passengers were left stranded at several stations, following which the national transporter has arranged for their food and further travel, officials said on Monday. Catch all live updates related to coronavirus outbreak in India and other parts of the world.

The Southern Railway alone dealt with over 4,500 passengers at the Chennai Central station and arranged for the accommodation of over 1,100 passengers at the state government-run shelter camps. A senior Railway Ministry official in Delhi said that railways remained vigil and helpful for all the passengers who were stranded at different stations across the country. Indian Railways Cancels All Passenger Trains Till March 31 As Coronavirus Cases Continue to Rise, Only Goods Trains to Run.

The railways has decided to cancel all passenger and express trains in view of Prime Minister Narendra Modi's appeal for 'Janata Curfew' from 7 a.m. to 9 p.m. on Sunday. The railways has announced that trains originating on Sunday between 4 a.m. and 10 p.m. will remain cancelled. However, the trains which started their journey plied to their destination.

On Monday, railways decided to cancel over 13,600 trains including express, mail and passenger trains across the country till March 31. Only goods trains are exempted from the suspension to ensure supply of the essential items.

The ministry official said that the national transporter faced issues at three stations. "We faced issues of passengers getting stranded at Jhansi, Chennai and Katni in Madhya Pradesh, due to the sudden decision to suspend express and mail train services," he said.

The official further said that the situation in Chennai was a bit different. He said that about 4,500 passengers were stranded at the Chennai Central station, most of whom were factory workers, who wanted to return home as the factory units have been closed in Kerala and Tamil Nadu.

"There were several passengers from Kerala who wanted to travel back to West Bengal and other states, but as all the train services have been suspended from Sunday midnight, the passengers were left stranded in Chennai," he said.

He said there were about 4,500 such passengers who wanted to travel back to their respective states. "So we arranged food and water for them in the night," he said, adding, "Later they were shifted to state government-run camps for further stay."

The Southern Railway spokesperson also confirmed that about 1,100 stranded passengers were shifted to the state government-run shelter camps in view of the suspension of train services amid the Covid-19 pandemic.

He said: "The Chennai Corporation provided food to over 4,500 passengers stranded at the Chennai Central station and a total of 1,629 stranded passengers were evacuated from there and taken to 18 different relief camps.

"This was done by the state government, fully facilitated by the RPF, commercial staff and Government Railway Police (GRP)." The spokesperson further said that the passengers who had their accommodation in Chennai went back to their homes, while those who arrived in the city from Kerala were shifted to state government-run shelter camps.

The Railway Ministry official said that following the situation of heavy footfall of passengers at Katni and Jhansi stations, the railways arranged for their food and onward travel. He said the stranded passengers were accommodated in buses and sent to their destinations by the railways.

The Railways on Monday also extended the stay of passengers at the retiring rooms. Earlier, a passenger could stay at the railways retiring room from three hours to three days.

Till Monday, a total of over 400 confirmed Covid-19 cases have been reported in India. At least eight people have died due to the disease across different states. As a precautionary measure, many states have announced lockdown in several cities across the country.