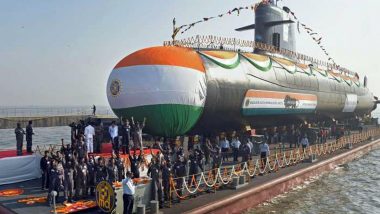 Indian Navy Chief Admiral Karambir Singh and Admiral (Retired) VS Shekhawat were also present. The submarine was delivered to the Indian Navy on February 15, 2021. INS Karanj was launched on January 31, 2018. The commissioning of INS Karanj will give a boost to India's shipbuilding capability. INS Khanderi to Be Commissioned by Defence Minister Rajnath Singh; Know All About Second Kalvari-Class Submarine, View Stunning Pics.

Here Are Features of The Ship:

The submarine has completed 100 days in the sea before induction into the Indian Navy. The first two submarines of the kalavari class – INS Kalavari and INS Khanderi - had already been inducted into the Navy. The fourth submarine, Vela, launched on May 6 2019, has commenced sea trials, the fifth submarine Vagir, was launched on November 12, 2020, and has commenced harbour sea trials, the sixth submarine – INS Varghese - is presently in an advanced stage of outfitting.

On the night of March 8, the Defence Research and Development Organisation (DRDO) on Monday night conducted the final development test of Air Independent Propulsion (AIP). The tests were conducted in Mumbai almost a day before the induction of the INS Karanj. The AIP technology will make Indian submarines more lethal as it will allow them to remain underwater for a longer period of time.

(The above story first appeared on LatestLY on Mar 10, 2021 02:57 PM IST. For more news and updates on politics, world, sports, entertainment and lifestyle, log on to our website latestly.com).