A communal clash broke out in Kanpur on Friday after members of one community started forcing closure of shops in the Beconganj area after the Friday prayers. 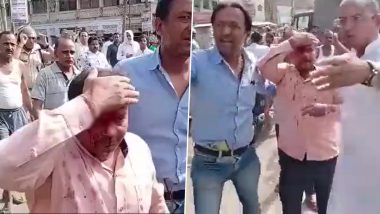 Kanpur, June 3: A communal clash broke out in Kanpur on Friday after members of one community started forcing closure of shops in the Beconganj area after the Friday prayers.

The members had announced closure of the market in protest against BJP spokesman Nupur Sharma's purported derogatory remarks on Prophet Mohammad.

After Friday prayers, members of one community started getting the shops closed and the other community protested over this. Kanpur Shocker: Police Constable Desh Deepak Kumar Found Murdered by Colleague.

This led to clashes, followed by stone pelting and brick batting. Sources said that the miscreants had also fired in the air.

Seventeen persons have been taken into custody after the incident.

ADG, Law and Order, Prashant Kumar said that the situation had been brought under control and additional forces had been deployed. He said that the reasons that led to the flare-up would be probed.

He said that video footage was being scanned to identify the accused.

Incidentally, President Ram Nath Kovind, Prime Minister Narendra Modi and Chief Minister Yogi Adityanath were in Kanpur Dehat, a neighbouring district around the same time when the clashes broke out.

(The above story first appeared on LatestLY on Jun 03, 2022 05:43 PM IST. For more news and updates on politics, world, sports, entertainment and lifestyle, log on to our website latestly.com).