The fresh guidelines came after a meeting chaired by Chief Minister B.S. Yediyurappa with senior ministers and officials at his official residence 'Cauvery' here. Cinema theatres/multiplexes would be allowed to operate with 50 per cent occupancy after adhering to Covid safety protocols, the order said. 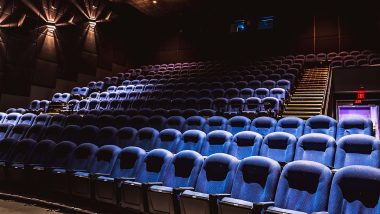 Bengaluru, July 18: Karnataka on Sunday announced fresh relaxations to the Covid lockdown norms by allowing temples, cinema halls/multiplexes, 'rangamandiras' (theatres), auditoriums and similar entertainment centres to reopen across the state from Monday - with 50 per cent capacity.

According to fresh guidelines released by the Revenue Department here, besides all entertainment centres, the state government also reduced the duration of night curfew by an hour from July 19, while higher educational institutions like colleges and universities will start from July 26, but with riders.

The fresh guidelines came after a meeting chaired by Chief Minister B.S. Yediyurappa with senior ministers and officials at his official residence 'Cauvery' here. Cinema theatres/multiplexes would be allowed to operate with 50 per cent occupancy after adhering to Covid safety protocols, the order said. Karnataka Class 10 Board Exams 2021: 8.76 Lakh Students To Appear for SSLC Exams From Tomorrow.

Colleges, universities and all skill-development training centres, including long-term technical courses, will be allowed to operate from July 26 but the respective institutions can allow only those who have been inoculated with at least one dose of vaccine to attend their duties and classes. After the meeting, Revenue Minister R. Ashoka told reporters that it was decided to lift all restrictions enforced in temples across the state.

"Temples will resume their regular operations from Monday. Though issue of reopening pubs and swimming activities did figure during the meeting, but a decision was not taken on these two activities," he said in response to a question.

The minister added that relaxations announced by the government would help the cinema industry in a big way, as theatres had remained shut for the longest time since last year, among all other sectors. He added that relaxation of the night curfew, which was from 10 p.m. to 5 a.m. from Monday, would help daily wage workers to a large extent. Manipur Imposes 10-Day Total Lockdown for 10 Days From July 18 Due to Surge in Cases of Delta Variant.

After the second wave of pandemic had hit the state in early April this year, the government had imposed restrictions since April 27 and these were made stringent from May 10 as the Covid positive cases on daily basis had touched around 50,000 cases. From May 5, the state government had enforced stringed lock down measures till June 14. Since then, the government had been easing lockdown norms step by step as suggested by experts. First round of easing lockdown restrictions was on June 14, then again these were eased further on June 21 and again on July 5.

(The above story first appeared on LatestLY on Jul 18, 2021 09:09 PM IST. For more news and updates on politics, world, sports, entertainment and lifestyle, log on to our website latestly.com).